Ryanair to re-establish Belfast base

Airline expected to operate this time from Belfast International Airport 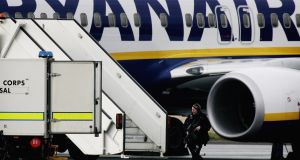 Ryanair is expected today to make good on a promise issued last month by chief executive Michael O’Leary to expand and re-establish a “base in Belfast”, operating this time, according to industry sources, from Belfast International Airport.

The budget airline had previously operated services from George Best Belfast City Airport for a three-year period from 2007 but hastily withdrew from Belfast because it was frustrated over ongoing delays in relation to a planning application by the airport to extend its runway.

The airline continued to operate from the City of Derry Airport.

Last month Mr O’Leary told the audience at a Dublin Chamber of Commerce lunch that he hoped to be “shortly” announcing a new base in Belfast which he promised would be “another large base in Ireland and the UK”.

The airline had previously said that if it could secure “workable Belfast-Gatwick slots” it would launch a high frequency service.

Aer Lingus confirmed in November that it would discontinue its services between Belfast City Airport and Gatwick from March thereby freeing up the slots from the North coveted by Ryanair.

1 Fierce backlash to Dutch hard line on eurobonds
2 How to budget your way through financial realities of Covid-19
3 Meath couple’s company hit with €105m discount on purchase price
4 US authorities scrutinise Zoom’s practices as app’s traffic surges
5 US stocks end quarter down 20% in biggest drop since 2008
6 Communicorp cuts pay by up to 25% at its radio stations
7 Medtronic shares ventilator design publicly to increase production
8 Nice to see you: Which is the best video calling option around?
9 Irish economy to suffer mildest shock to output from Covid-19, OECD says
10 J&J and Abbott announce potential coronavirus vaccine and rapid test
Real news has value SUBSCRIBE