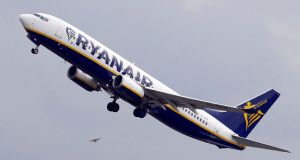 Ryanair claims to be the most visited airline website in the world.

Speaking at a press conference at the Web Summit in Lisbon, Mr Jacobs said the airline had hoped to introduce an integrated system enabling customers to buy long haul tickets with its rival earlier this year.

However, he added the airline now anticipates this starting with the first half of 2018.

Mr Jacobs said the airline hoped to be able to offer flights from other carriers in the IAG stable and said it was happy to work with any airline.

He also defended Ryanair’s treatment of pilots, saying the airline was a great one for them to work at and claiming it was gaining pilots from rival carrier.

“We have an incredible number of pilots from Alitalia and Air Berlin applying to join Ryanair. We’ve also hired from Monarch as well,” Mr Jacobs said.

“We love our pilots. They do an amazing job and we determined to have the most attractive conditions for them,” he added

Ryanair on Tuesday announced a number of new initiatives, including a new event ticketing website, a newly improved Ryanair Rooms site and app, a dedicated Chinese language platform and the addition of connecting flights from Porto.

Porto is the third city after Rome and Milan/Bergamo to offer connecting flights.

Ryanair, which is expected to carry 129 million passengers this year, currently has 240 aircraft with a further 240 being added over the next six years.

Mr Jacobs said the company remains intent on becoming the ‘Amazon of travel’ and becoming “a digital travel retailer with a low-cost carrier at its heart.”

The company claims to be the most visited airline website in the world with Mr Jacobs proudly proclaiming it gets 94 per cent direct visits and “doesn’t spend a cent with Google”.

He said Ryanair has 15 per cent of the European short haul market currently but intends to increase this to 20 per cent by 2024.

“Over the past four years we’ve changed more than any other airline in the world,” said Mr Jacobs.