Airline to fly weekly to and from Central Europe 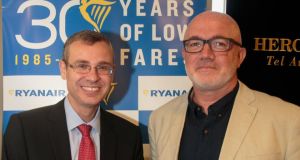 Ryanair has announced plans to start flying to and from Israel to a number of destinations in Central Europe.

The airline is to introduce three new routes from Eilat Ovda airport in the south of the country to Budapest, Hungary, Kaunas, Lithuania and Krakow, Poland.

Ryanair estimates the new routes , which commence in November, will deliver about 40,000 passengers a year.

The company’s chief commercial officer David O’Brien said Ryanair was continuing to negotiate with the Israeli authorities to increase the number of flights it offers in the country.

The airline recently sought to acquire Cyprus Airways as part of a move to allow it to fly from there to Israel, Turkey and other countries in the eastern Mediterranean and Middle East. It said in January that it intended to expand in the region despite the flag carrier being closed down.