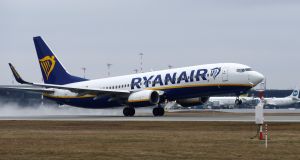 Ryanair is asking the court to stop its outgoing chief operations officer, Peter Bellew, from joining rival EasyJet in January.

Ryanair dismissed four cabin crew last year for refusing to fly, one of the airline group’s executives confirmed in the High Court on Friday.

The airline wants the High Court to stop outgoing chief operations officer Peter Bellew from joining rival EasyJet in January, saying he had agreed not to join any competitor for a year after leaving the company.

Mr Bellew maintains the agreement is null and void, denies any breach of contract and pledges to honour all confidentiality obligations to Ryanair.

Eddie Wilson, chief executive of Ryanair Designated Activity Company, the airline group’s main subsidiary, confirmed that it dismissed four cabin crew for refusing to fly from Cologne in Germany to Palma in Spain, where they were based.

Mr Wilson pointed out that only commanders – flight captains – have discretion not to fly. He stressed that the crew did not refuse on this basis.

He told the court that they contacted the airline’s flight operations to complain that there was not enough food or water on the flight.

Mr Wilson maintained that the complaints were found to be baseless and that the crew raised the issue of fatigue with regulators “post the events”.

The flight subsequently took off with another cabin crew, but the same pilots. Mr Wilson said that Ryanair carried out an internal investigation and then invited the crew to a disciplinary hearing, after which the four were dismissed.

Tom Mallon, Mr Bellew’s barrister, pointed out that the crew had complained to the European air travel safety regulator, and the issue came before the Irish Aviation Authority, which held a hearing into the incident, where his client represented the airline.

However, Martin Hayden, Ryanair’s senior counsel, argued that issues raised at such hearings cannot be aired in public. Mr Justice Senan Allen indicated that the sides could deal with the issue when the case continues on Tuesday morning.

European Union Aviation Safety Agency rules allow commanders the discretion not to fly in unforeseen circumstances, including adverse weather and air traffic delays, where the crew may be fatigued.

Earlier yesterday, Mr Wilson said that Mr Bellew had confidential information on Ryanair that was extremely valuable to rivals.

He argued that Mr Bellew would know how Ryanair kept its cost per passenger €14 below that of EasyJet.

“At 100 million passengers, that’s €1.4 billion in costs,” Mr Wilson said. “People would kill to get that information.”

Ryanair’s chief commercial officer, David O’Brien, pointed out that the key difference between the two airlines was cost, which allowed the Irish player to offer lower fares than EasyJet.

Mr O’Brien calculated that EasyJet would compete for 24 per cent of Ryanair’s business this winter.

Mr Bellew’s lawyers argued that as the chief operations officer had not attended management meetings since confirming his move last July, he had no access to confidential information relevant to Ryanair’s competitors.

Meanwhile, a restriction barring media from reporting Ryanair’s internal profit target for its current financial year, which ends on March 31st, remains in place until Tuesday at least.

Mr Justice Allen restricted the press from reporting the figure on Thursday. Mr O’Leary and Mr Hayden argued that publishing it would breach stock exchange rules.

Following representation from The Irish Times and Irish Independent publisher Independent News and Media, Mr Justice Allen agreed to hear submissions on the question on Tuesday.