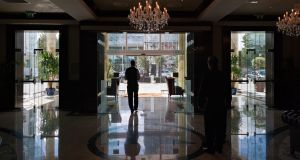 The Kingsley Hotel in Cork, part of the Fota Island Collection

A dispute concerning ownership of the Fota Island Resort in Co Cork and the Kingsley Hotel in Cork city has come before the High Court.

The action is by a Chinese businessman, Yuzhu Kang, from Hebei province, who has investments in China and Europe, including Fota Island resort, which he bought in 2013 following a sale concluded on instructions from the National Asset Management Agency.

In an affidavit, Mr Kang said he was given “valuable practical assistance” in that sale by Xiu Xiang Kelly, also from Hebei province, who married an Irishman after coming here and settled in Cork.

He said he had played a “passive” role in relation to his Irish properties and interests although he continued to make acquisitions outside Dublin, including the Kingsley Hotel.

His Irish properties were “a relatively small investment for me”, he intended them as a long term investment and, on that basis, was happy to leave their general management under control of Ms Kelly.

His “only real engagement” with the Irish properties until the end of 2019 was receiving annual updates on their financial performance, initially from Ms Kelly and, from 2015 on, from Mr Tuo Du, of Fota Island Resort, he said.

Those updates have transpired to be “misleading, he said. He said he had always understood and intended he would be the ultimate beneficial owner of his investments, that was the position but, as a result of certain changes effected without his knowledge or consent, that was “no longer the position”.

He had executed a power of attorney (POA) in favour of Ms Kelly in 2013 to allow her to manage his business affairs here and suspected she may have purported to execute the impugned transfer of his shares in two companies — Xui Lan Holdings Ltd (Holdings) and Lan Sideriver Investment Holdings Ltd, (Sideriver), both with registered offices in Ballincollig, Cork — in reliance upon the POA. His shareholdings in those companies have been transferred away from his ownership without his knowledge or consent, he claims.

He believed the transfer was “orchestrated by a trusted confidante”, Ms Kelly, “with the intention of opportunistically defrauding me, for her financial benefit”. Mr Kang’s proceedings are against Ms Kelly, Mr Tuo Du, and three companies - Holdings, Sideriver, and Allied Express International Development Ltd, with a registered address at Harcourt Road, Hong Kong.

It is claimed the effect of various transfers from 2014 was to vest in Allied ownership of almost all the shares in Holdings, the principal holding company of Mr Kang’s Irish enterprises, for no consideration to Mr Kang, and without his knowledge.

An injunction application by Mr Kang was adjourned by Ms Justice Leonie Reynolds on Thursday on undertakings from the defendants not to pay any dividend, distribution or carry out any sale or other dissipation in relation to the shares at issue.

Stephen Walsh BL, for Mr Kang, consented to the adjournment. Lyndon MacCann SC, with Kelly Smith BL, for the defence, said the undertakings would give time for his side to reply to the claims and facilitate an application to have the case fast-tracked in the commercial court.

Mr MacCann said Ms Kelly has “a very different take” from Mr Kang concerning what has happened. Her position is the shares at issue were at all times beneficially owned by her and this case was an attempt at “a shakedown” by the plaintiff.

When Mr MacCann indicated he might seek fortification of the plaintiff’s undertaking for damages due to concerns about the plaintiff’s financial position, Mr Walsh said he was instructed Mr Kang is “of very substantial means” and could confirm his undertaking for damages. Mr MacCann also reserved his right to bring an application regarding “very material non-disclosure” of relevant material.