Aran Islanders came to the mainland to protest about the possible loss of their air service supplied by Aer Arann for 45 years. It is proposed that a helicopter service replace it. Video: Bryan O'Brien 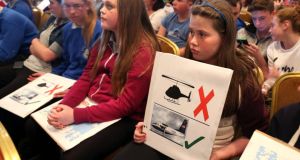 The protest in the Connemara Coast Hotel in Furbo, Co Galway, against the helicopter replacement of the plane service to the Aran Islands. Photograph: Joe O’Shaughnessy

“That’s where you get weighed,” says the woman at the desk at Aerfort na Minne, pointing to a scales on the floor. “It tells us where we have to put you on the plane. Down the back or up the front.”

The Aer Arann Islands aircraft are small, but the residents of Inis Mór, Inis Meáin and Inis Oírr have been unrelenting in their campaign to save them.

That campaign took a blow last week when Minister for the Gaeltacht Joe McHugh said Executive Helicopters, based in east Galway, was the “preferred tenderer” for the State’s public service obligation contract to provide flights for the Aran Islands.

Total exchequer support for the Aran Islands air service has grown from about €800,000 in 2003 to €1.9 million in 2013, according to a 2014 review of the service. Passenger numbers amount to about 40,000 trips a year, divided roughly half and half between residents and tourists.

After passengers get weighed at Aerfort na Minne, which is located near Inverin, just across the water from the islands, they are led across the tarmac and into the plane.

“It gets out to the islands early in the morning so you can get a full day’s work done,” says Edward Kinnane, a Guinness employee who uses the service three times a month to visit the islands’ pubs. “It’s way handier than the boat.”

He’s booked on to the early flight to Inis Mór, which rattles into the air shortly after 8.30am and touches down on the island six minutes and 21 seconds later.

“It’s dead handy,” says a building contractor, as he steps off the eight-passenger aircraft. “I’d be loyal to them. They run a very good service.”

Loyalty to the airline, which employs about 40 people, is something the islanders have in abundance. It has served the islands for 44 years and every resident seems to have a story about how the staff went above and beyond to help them out of a fix.

Islanders are strongly opposed to the proposed change: a helicopter service operated out of Galway Airport, on the other side of the county, in Carnmore.

They say if an Aer Arann Islands flight from Inverin is cancelled because of bad weather, they can drive the 8km to Ros a’Mhíl and get the ferry, but that won’t be possible from Carnmore, which is 52km away from the ferry terminal.

“If the plane service goes, it’s a real step back for the island,” says Caitríona Ní Bhuachalla, a primary school teacher.

“There aren’t enough qualified teachers from the island itself so there are a lot of teachers who are from the mainland and they have to travel in and out. I could see us not being able to get qualified teachers in years to come if the plane service isn’t there,” she says. “It’s a death knell for the island.”