The new version delivers on comfort, safety and tech, but still trails rivals in terms of driving dynamics 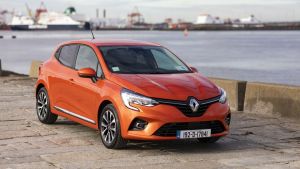 Motoring Editor Forget Nicole, Papa or Thierry Henry and his va-va-voom. Gemma is the new star of Renault’s small-car story.

In its latest ad for Europe’s best-selling supermini, the French brand has cast the history of its Clio as the backdrop to a three-decade romance between two women – Gemma and her unnamed French friend. As the relationship evolves from their childhoods, so does the Clio. There’s even a little melodrama in the middle, reflective perhaps of a time when the Clio also masqueraded as something it was not.

The cinematic ad has reduced the internet to tear-jerking joy at its success in capturing just how far many in society have come since 1990. A crass attempt at exploiting cultural changes for commercial gain? Sure, that’s the purpose of ads. But it’s also reminding us that cars aren’t merely commodities – they are often emotional carriages in life’s journey.

Over the last 30 years Clios have been metal cocoons for many Irish motorists where we’ve experienced moments of love, anger, anguish, joy and even tears. Not all of them due to ownership of this humble hatchback.

Away from the French car giant’s ability to more deftly play the nostalgia card than RTÉ’s Reeling in the Years, Renault is also sending a message to motorists: the tagline “30 years in the making” is an admission of some motoring missteps along the way.

For while there were some highlights, such as winning the prestigious European Car of the Year title twice, the Clio hasn’t always cut muster.

Up against key rivals like the Ford Fiesta and VW Polo, the Clio may have boasted Gallic charm but it often seemed too soft and unsophisticated at its core. There was always a stonking sports version, of course, but the average fare was bouncy and squishy on the road, with a rubbery steering feel and a drab interior.

None of this is news to the Renault engineers and designers. At a frank and open briefing to journalists earlier this year, everyone from the boss of the new Clio’s development programme to the chief designer spoke about their desire to address criticisms of past generations.

In fairness to the folks tasked with coming up with the fifth generation of Europe’s favourite supermini, they were operating under strict constraints. Any Clio has to be of a size and price that fits the needs of a wide general audience. After all, for 45 per cent of these buyers the Clio is the only car in the household.

So it has to be versatile, comfortable, smartly dressed and featuring the latest tech. It also needs to be loaded with all the latest safety kit for it will be the motoring home for teenagers making their first foray on to public roads, or first-borns strapped atop booster seats in the back. All at an affordable price that makes profit margins extremely tight.

Let’s start with safety: the new Clio claims the highest Euro NCAP rating for a small car. Of course others have garnered the same results, but the tests are tougher now than they have ever been.

The engineers also point to the decision to fit LED lights as standard, while in terms of active safety emergency auto-braking also works up to speeds of 170km/h. So far, so impressive.

There are also a few nice options on offer, like a version of autonomous driving billed as “highway and traffic jam companion” that delivers steering assist at a level similar to many premium cars.

Perhaps the most impressive of these elements during our week with the Clio was the speed-limit assist, which emits a little ping every time you drift a few kilometres over the designated limit. Given the proposed new penalty points regime, it could prove an invaluable option.

In terms of styling there’s not much to say about the exterior: it’s pretty evident from the images that the car is very much an evolution of what went before. The Clio is marginally shorter and slightly lower than before, and dressed up in a nice set of alloys it looks positively sporty.

Inside is where the real revolution has taken place. From the soft-touch plastic trim to the tech, it is kicked the Clio right up to the front of the list. The development team has got the mix of physical buttons and touchscreen controls just right.

Thanks in part to a wider girth the Clio also boasts ample head and leg room, while at the same time keeping your elbows away from the passenger next to you. Rear-seat leg room is a little more compromised for adults, but there’s enough width in the back to transport three mid-sized teens, helped by a low hump in the centre of the floor.

Bootspace is up there amongst the best with 391 litres on offer that puts it on a par with full-sized family hatchbacks like the VW Golf, and a further 26 litres of nooks and cubbyholes around the cabin.

On the road probably the best option for Irish buyers – for now – is the version we tested, with the little three-cylinder 1-litre putting out 100bhp. It could do with more low-end pep and you need to work through the gears to kick it on, but it’s the best buy until the hybrid version arrives next year.

The new Clio still suffers from a little softness in its ride quality, however. Its two arch-rivals, the Polo and Fiesta, both cope better with the reality of Irish road surfaces. It’s not uncomfortable, it’s just the suspension is not as well-tuned to soak up the bumps and potholes as other superminis in this class.

On a more positive note the car does handle impressively well, and it corners quite sharply. The steering, however, still feels a little vague, so it’s not up to the levels of the Fiesta in this regard. Renault engineers have heard this complaint for generations now and they haven’t changed it, so perhaps it’s now regarded as part of the Clio’s DNA.

To sum up, the Clio scores high for practicality and comfort, delivers plenty of safety features and tech, while still trailing rivals in terms of driving dynamics.

For Gemma, and the millions of other motorists who have a nostalgic soft spot for the Clio, the new generation probably delivers in the areas that matter.

As a thirtysomething couple with a young child, Gemma and her French partner would be unlikely to fork out that extra cash for the sake of a sharper steering feel. At least that’s likely to be Renault’s hope.

The problem really is that she’s more likely to be lured away from buying any supermini at all by the plethora of crossovers filling forecourts these days. That’s the real threat to the Clio and its ilk these days. Buyers are flocking to faux SUVs even if it’s as big a mistake as Gemma’s ill-fated marriage in the middle of the ad. Perhaps that’s the takeaway message of the Clio ad: it’s never too late to admit your mistakes and try and get it right.