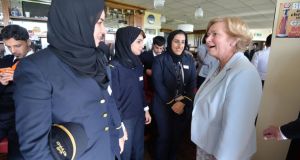 The Irish and British governments will shortly launch a joint visa programme enabling tourists and other visitors from outside the European Union to move freely between the two jurisdictions using the same travel documents. Speaking yesterday, Minister for Justice Frances Fitzgerald revealed that the two governments aim to agree formally a joint Irish-British visa scheme in the next 10 days.

The programme will allow non-EU visitors to the Republic to use their Irish visas to travel to the UK, and those with UK visas to come to the Republic. The deal, which officials say stems from commitments on closer co-operation in various Anglo-Irish agreements, will mean that each jurisdiction effectively acts as a visa authority for the other.

Tourist industry leaders are likely to welcome the move as it will ease entry into Ireland for visitors from fast-growing non- EU markets, such as China.

Ms Fitzgerald was speaking at College Ireland Aviation Services (CIAS), in Weston Airport, Co Dublin, which was marking its first intake of 35 cadet pilots from the Gulf airline Etihad. The cadets are spending three months at the college learning aviation English as part of their overall training.

They are part of a total group of 100 who will travel from Etihad’s headquarters in Abu Dhabi to the Co Dublin airport and college over the coming months in a deal that represents a €1.3 million investment on the part of the Gulf carrier.

CIAS chairman Brian Joyce said that Etihad is interested in extending the deal with the college from three years to five. At the same time, talks are continuing about further arrangements, the first of which will see Etihad staff placed on internships in Irish aviation businesses for six- or 12-month periods.

“The next stage will involve us providing staff and management programmes for Etihad in partnership with Trinity College Dublin and IT Blanchardstown,” Mr Joyce said, adding that these courses would run from diploma and degree level through to MBA.

CIAS grew out of an education initiative begun by Mr Joyce, a former air traffic controller, with his old employer, the Irish Aviation Authority.

Yesterday’s launch was also attended by a number of senior Etihad executives.