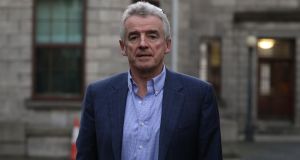 Ryanair’s chief operations officer (COO) Peter Bellew “knew from the get-go” there was a clause in his contract of employment preventing him joining a rival for a period of 12 months post his departure from the airline, the High Court has been told.

The claim was made by Martin Hayden SC in opening Ryanair’s case against Mr Bellew over his decision earlier this year to leave the company at the end of this month and join rival airline Easyjet as its chief operating officer.

Mr O’Leary said a non-compete clause was standard in contracts of employment for senior managers, known in the airline as “Zs”.

Mr O’Leary told Mr Hayden the contracts provide that Zs must give six months’ notice and are prevented from working for rival airlines for 12 months post-termination of their employment. The Zs are paid a basic salary and bonus and also receive share options once they stay with the company for a specific period of time, he said.

The share option scheme is designed to promote company loyalty among the Zs and other senior personnel, he added. As a Z, Mr Bellew would have access to important, commercially sensitive information concerning Ryanair that would benefit a rival, not just about the part of the airline he was responsible for but all others areas as well, he said.

While all airlines could be regarded as rivals to Ryanair, Easyjet would be considered its main competitor in the low-fares sector, he said. Ryanair’s action opened before Mr Justice Senan Allen on Tuesday morning and is expected to last several days.

It wants orders requiring Mr Bellew, Glenconnor House, Killarney, Co Kerry, to specifically perform his contract with Ryanair, including the non-compete clause and restraining him acting contrary to the post-termination restrictions in his contract.

Mr Bellew, represented by John Rogers SC and Tom Mallon BL, has held a number of senior roles in the aviation industry and was previously Malaysian Airline’s chief executive and Ryanair’s director of flight operations. In his defence, Mr Bellew denies Ryanair’s claims, denies breach of contract and says the purported clause is unenforceable.

Following discussions with Mr Bellew, he took up the role as the COO with Ryanair, which involved taking charge of all flight operations, he said. Mr Bellew was also responsible for flight operations, engineering, and pilot training and recruitment.

After leaving Ryanair to take up a senior post with Malaysia Airlines in 2015, Mr Bellew had missed out on a payment under a share option scheme, Mr O’Leary said. As part of the agreement for his return to Ryanair, a payment of €1.1 million was made to Mr Bellew under the share agreement scheme that was in place between 2014 and 2019, he said.

The issue of a non-compete clause was never raised by Mr Bellew with him, Mr O’Leary said. As part of his role Mr Bellew would have attended regular meetings with the other Zs, where important and sensitive information about Ryanair would have been discussed, including the price Ryanair pays for its aircraft tyres and ground services at airports.

Mr O’Leary said he had, in November 2018, sent a memo to Mr Bellew about his performance as COO. He said that things that should have been done by Mr Bellew were not being done and decisions were not being made by him, as COO, for several weeks.

Mr O’Leary said he was unhappy about issues including the COO’s handling of Ryanair’s change of baggage policy and when Mr Bellew went to Brussels to speak at a function.

Information in reports from the COO to the CEO was also incorrect, Mr O’Leary said. Mr O’Leary, who told the court he does not use email, said he was further dissatisfied with a response he received from Mr Bellew regarding his memo. The hearing continues.