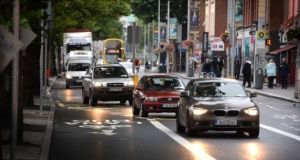 A one-year change to BIK on electric vehicles is likely to have little impact: Photograph: Dara Mac Dónaill

A zero per per cent rate of Benefit-in-Kind (BIK) for one year on electric vehicles was the only measure in a budget that otherwise left the motorist untouched.

The Government opted not to raise the price of diesel, despite speculation it would seek to close the price gap with petrol. Environmental groups had pushed for a so-called equalisation of the prices of both fuels over five years in an effort to reduce the use of diesel, due to its harmful emissions.

However, the only measure announced was the roll out of a new incentive for company-owned electric vehicles. The Government estimate the cost of the BIK incentive at just €500,000, although it will ultimately be determined by the take-up of the scheme.

In his speech the Minister for Finance, Paschal Donohoe, said the move will allow time for a comprehensive review of BIK on motor vehicles in time for the next budget.

According to Alan Nolan, director general of the Society of the Irish Motor Industry (Simi), the move is welcome as it promotes these vehicles as a more viable proposition, particularly for low mileage motorists for whom the limited range of many electric vehicles is not an issue. However, it is so limited in scope that it will have very little impact, given that most companies buy vehicles over three-year periods, he said. “If it really wants to make an impact any such scheme needs to relate to the buying cycle.”

In terms of the ongoing incentives for electric vehicles Mr Nolan said: “The real incentive will not necessarily be more financial supports but rather changes introduced at local level, such as free parking, tolls and not clamping electric vehicles while they are recharging on public streets. These promote the overall ownership model.”

The one-year lower BIK rate will come on top of the current Vehicle Registration Tax (VRT) tax relief to a maximum of €5,000 and the SEAI grant of up to €5,000 already in place. Mr Donohoe said he will also be bringing forward proposals for discussion in the New Year in relation to VRT on leased vehicles.

So far this year 65.3 per cent of new cars had diesel engines, compared with 30.6 per cent petrol. While electric new car sales have reached 579 this year, it represents only 0.45 per cent of all new car sales. Petrol-elecric hybrids have recorded greater success, with 4,343 registered up to the end of September, representing 3.38 per cent of the new car market. There is also a growing market for plug-in petrol elecric hybrids, with 292 new sales to dat this year.

New car sales are down 10.2 per cent so far this year, with 128,584 vehicles sold up to the end of September .This is partly due to the rise in used imports, up 37.7 per cent this year at 70,821. Weaker sterling has attracted buyers to shop in the Britain or NorthernIreland.

While there had been speculation about moves to increase the tax on diesel, concerns were expressed by the motor trade that, with the average age of Irish cars at 9.1 years, it would be ambitious to expect many motorists to be able to trade out of these low-value older cars into new electric or hybrid models.

There remains a limited number of electric models on the market, particularly in the used car fleet. According to lobbyists, a significant increase in taxes on diesel would penalise hard-pressed motorists with older cars, serving only to assist wealthier motorists who can afford to make the change.