Lufthansa cancels 1,700 flights due to strike set for Monday 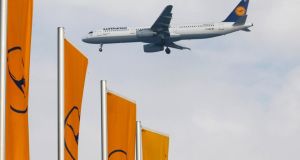 Germany's largest airline Lufthansa said it was cancelling almost 1,700 flights on Monday, mostly on domestic and short-haul European routes, as a result of planned strike action by thousands of workers calling for higher pay.

Verdi, representing 33,000 staff at the airline, announced the strike action today to put pressure on Lufthansa management to make a better pay offer.

The union said the offer put forward by Lufthansa on Wednesday was "scandalous".

Lufthansa has estimated the strike will cost it tens of millions of euro and has described the labour action "absurd" and "out of proportion", given the early stage of negotiations.

"Despite an offer being made by Lufthansa in the last round of negotiations, despite constructive talks and further dates for more talks, Verdi is once again holding our customers hostage in this pay dispute," said Stefan Lauer today.

Mr Lauer is Lufthansa's executive board member for personnel and is leading the pay talks, although he is stepping down by the end of June.

Lufthansa's offer was to raise salaries by 1.2 per cent from October this year and a further 0.5 percent a year later, in a deal that would run for 29 months and would not contain job guarantees.

Staff represented by Verdi have already held a one-day strike on March 21st, forcing Lufthansa to cancel nearly 40 percent of its average 1,750 flights for the day.

Lufthansa also recommended passengers restrict themselves to hand baggage where possible, in an attempt to avoid the sort of queues seen at check-in desks in Frankfurt during March's strike.