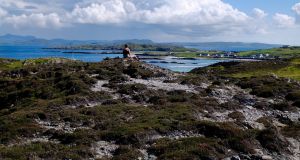 Inishbofin has become the first Irish island to receive an international ecotourism award.

The Ecotourism award, which will be presented today to a number of people and organisations involved with promoting the island, is recognised by the Global Sustainable Tourism Council.

One of the recipients of the award is storyteller and archaeologist Tommy Burke, who is an expert on Inishbofin’s Bronze Age settlements, monastic sites, a Cromwellian fort and the “pirate presence” of Grace O’Malley.

Among the activities that helped to secure the certification are birdwatching and nature photography holidays offered by the Dolphin Hotel; the Beach Bar’s self-guided walking and angling trips; sailing with John Francis Day; horse-riding and stand-up paddling.

Ecotourism Ireland chief executive Mary Mulvey said other tourist attractions had already received, or were due to get, certification in Galway, Clare, Meath, Cork and Kerry. Projects include Cnoc Suain hill-village near An Spidéal; Actons beachside camping near Clifden in Connemara; and tree climbing at Rock Farm Slane in Co Meath.