Potential impact on international links to be examined 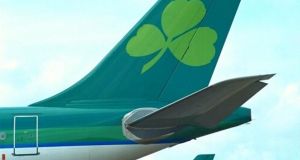 Aer Lingus is expected to recommend a takeover bid from IAG, the owner of British Airways and Spain’s Iberia. IAG’s €2.50 a share cash takeover approach marks its third bid in just over a month

Minister for Transport Paschal Donohoe has said the Government will look at any offer for Aer Lingus from the perspective of both its value and potential impact on the Republic’s links with the rest of the world.

“I and the Government will take huge care in evaluating any proposal that comes in,” Mr Donohoe told The Week in Politics programme on RTÉ.

He said that all issues in relation to retaining slots at Heathrow Airport, as well as job security at Dublin, Shannon and Cork airports will be considered.

Mr Donohoe is due to brief the Cabinet on Tuesday in relation to reports of a third offer made by International Airlines Group to buy the airline.

Discussions are understood to be continuing this weekend after the Aer Lingus board discussed the higher offer, believed to be about €2.50 a share, at a meeting on Friday.

If the board does recommend the bid, the Government, which holds a 25.1 per cent stake, will have to decide whether to accept or reject it.

Tánaiste Joan Burton has warned that protecting Ireland’s air links with Europe and the US is of vital importance if the deal is to go through. She said retaining valuable slots in Heathrow is critically important for the Irish Government and for the country in terms of inward investment, exports, business and tourism. “What we will want to do as a Government, and what’s absolutely important, is to protect these slots and the connections of direct flights in and out of

Ms Burton refused to be drawn on whether the deal hinges on a guarantee period during which the slots would be retained. But she noted the importance of Ireland as a transit hub for people flying to the US and using pre-clearance facilities in Dublin and Shannon. “It’s very, very important. That will be absolutely foremost in the Government’s mind in terms of Aer Lingus,” she said.

However, Fianna Fáil spokesman on transport, Timmy Dooley, called on the minister to declare that he would use the State’s 25 per cent stake in Aer Lingus to block an IAG takeover.

He claimed that such a deal would see the Irish airline’s landing rights in Heathrow “siphoned off”, threatening vital business and tourism links and costing jobs at Cork, Dublin and Shannon airports.

If it gets approval of the Aer Lingus board, IAG would be expected to outline in detail its plans for the future of the airline, which will be central to the Government’s decision, as connectivity in out and of Ireland is seen as a vital issue for the economy.

A key aspect of this would be the plans IAG has for the landing slots which Aer Lingus hold at Heathrow airport.

The Aer Lingus board rejected two earlier offers from IAG over the past six weeks, one of €2.30 a share and another of €2.40.

The fact that it has not issued a formal rejection immediately following the third offer suggests that it may accept this time.

The board has to act in the interests of all shareholders and is likely to communicate its view to the stock market on Monday morning.

IAG was created in 2009 after the merger of British Airways and Iberia.

IAG and Aer Lingus have both declined to comment on the reports.

The key players in the talks have been IAG chief executive Willie Walsh and Aer Lingus chairman Colm Barrington. The other key player in the takeover is Ryanair, which has a 29.8 per cent stake in Aer Lingus.

Under a UK competition ruling it is likely to have to dispose of most of its shares in the near future, unless it prolongs a legal fight against this ruling. Ryanair has taken an appeal to the UK courts against the competition decision, but is expected to lose this. It has said that it has been looking for a buyer for the stake and its intentions will now be crucial.

If Ryanair and Aer Lingus’s other shareholders accept, then the spotlight will be on the Government. Minister for Transport Pascal Donohue has outlined the government’s view of the importance of the connectivity issue, but has not ruled out a sale.

Fianna Fáil transport spokesman Timmy Dooley has already called on the Government to block a sale, saying the threat to the landing slots was being “dramatically underestimated” and a sale would have a significant impact on Dublin, Cork and Shannon airports.

IAG, once it has the formal approval of the Aer Lingus board, is likely to try to address some of these concerns through outlining its plans for Aer Lingus and for the slots at Heathrow.

Mr Walsh, himself a former Aer Lingus chief executive, will be aware of the political issues he has to navigate if the bid is to succeed.

A key issue for the Aer Lingus board is whether it could forge an independent future as a smaller European airline, or needs to be part of a bigger group in a consolidating industry.

A number of market analysts have said that strategically a purchase by IAG makes sense, providing a larger parent for Aer Lingus and new growth options for IAG.

Fianna Fáil transport spokesman Timmy Dooley called on Minister for Transport Paschal Donohoe to rule out the sale of the Government stake in Aer Lingus in order to protect “strategic national interests”.

Any sale of the airline could see its critical Heathrow slots “siphoned off, risking future connectivity and jobs at Dublin, Cork and Shannon airports”, he said.

“IAG’s pursuit of Aer Lingus is becoming more aggressive with every passing week, and I am gravely concerned by the Minister’s silence on the issue.”

Clare Labour TD Michael McNamara sought assurances that the Shannon-Heathrow slots were “legally safeguarded in any sale of the Government stake in Aer Lingus.

He said he acknowledged the Minister’s comments during the week that the approaches were in the offer phase and that he would ‘proceed with great caution’.

“But with a new offer likely to go to the market on Monday, we have to be clear that no price will cover the cost of the loss of the Shannon Heathrow flights to the west of Ireland, and indeed the country as a whole.”