Go (north) west: how tourism is faring in Donegal, Mayo and Sligo

Business owners in the west of Ireland credit the Wild Atlantic Way, Westport's Greenway and the reduced 9 per cent VAT for tourism and hospitality services for boosting tourism in recent years. Video: Mark Paul 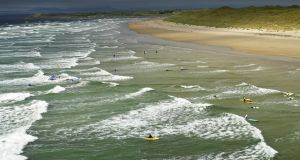 Tullan strand in Bundoran, Co Donegal, which has become one of Europe’s surfing hotspots.

The tourism industry is hopping, visitor numbers are up 13 per cent and their spending is up by a tenth: almost €2 billion from January to June. It is Ireland’s second-biggest export and it employs nearly 250,000 workers. Tourism appears in rude health.

Ahead of next month’s Budget and the debate over retaining the 9 per cent special tourism VAT rate brought in to stimulate the sector in 2011, The Irish Times took a trip around Ireland.

I spoke to scores of tourism business owners, steering clear of the “golden triangle” of Dublin, Galway and West Cork/Kerry. In a series of articles, videos and podcasts, beginning today and ending Friday, we take the up-to-date temperature of the Irish tourism industry. Is it uniformly hot?

First overnight stop was Donegal, which has benefited from the marketing of the Wild Atlantic Way along Ireland’s coast. Paul Diver owns the fine, 55-bedroomed Sandhouse Hotel in Rossnowlagh, which he bought out of insolvency in 2011 for €650,000 – the price of a three-bed semi in south Dublin.

Diver lauds the influence of the Wild Atlantic Way, one of the biggest successes Fáilte Ireland, the State tourism agency, has ever had. “It’s been great, though we are still not yet seeing the number of overseas visitors here we want.”

Nevertheless, there are Americans in the Sandhouse bar that night. One asks the barman for a shot of his best whiskey.

Tourism is vital to the local economy, Diver says. “I know at least 10 girls from Ballyshannon who put themselves through third-level on money earned working here. All my staff come from a ten-mile radius.”

Less than 12 miles down the road is Bundoran, where the main season has ended. Despite the regularly inclement weather, it has become one of the finest surfing hotspots in Europe – a welcome renaissance for a town that was a mecca for domestic tourists in times past.

Shane Smyth is the Discover Bundoran tourism officer, with his salary paid by the council. We meet in Brennan’s Bar, a picture-postcard pub run by two elderly sisters, Nan and Patricia, who were born in a room above.

“The genius of the Wild Atlantic Way is the main ingredients were always there. People just needed to be shown what route to take,” he says.

Smyth says this year, Bundoran was busy, but there has been a “slight fall-off” in visitors over the border from Northern Ireland since the Brexit vote.

However, the Donegal region, Smyth argues, is still “falling behind” Dublin and other areas when it comes to the growth in visitor numbers. This makes the 9 per cent VAT rate crucial for sustaining the industry in the area.

Hoteliers Brian McEniff – who owns the Great Northern as well as others in Sligo and Dublin – and John O’Connell, who owns the Atlantic Apartotel, both agree it will be years before the full benefit of the Wild Atlantic Way is felt.

“The 9 per cent rate has also boosted profitability, and that shouldn’t be forgotten when we are trying to stimulate investment,” says O’Connell.

“We don’t have many other industries so tourism alone is the best opportunity for this area. It is important the rate is maintained.”

McEniff, meanwhile, would like more resources to be spent marketing the region and on infrastrcuture and access.

“I don’t know what we would do if we didn’t have a tourism officer,” says McEniff. “We need funding, we need infrastructure and we need marketing money.”

Further south along the Wild Atlantic Way in Kerry and west Cork, McEniff says, “it is easy to sell the product off season because of the infrastructure they have”.

Down the street, overlooking the sea, is the TurfnSurf hostel and surfing school. Owner Killian O’Kelly jokes he sells “yuppie surfing” to his guests, who wear winter wetsuits and are ferried to the beach in landrovers. His hostel is more like a small budget hotel.

“We get a lot of Google and Facebook workers coming up from Dublin. But the season is really short. We have tried to lengthen it and diversify as best we can.”

O’Kelly this year launched Irish Gap Year, a programme to take in young adults from the US for three month stints, to help address the seasonality.

The gap year students are housed in what used to be O’Kelly’s family home on the edge of town. One of the dorms was his childhood bedroom.

“With tourism seasonality, 150 days of the year, we weren’t doing any business at all. We had to do something about that. We can’t keep our best staff unless we can offer employment 12 months a year.”

Down the road in Strandhill, Sligo, Neil Walton of Voya Seaweed Baths says business in the town is up “8 to 12 per cent” this year.

He hopes to almost double the size of his business in coming years, although he is irked his business doesn’t qualify for the 9 per cent rate: “about 70 per cent of my trade is tourists.”

Initiatives such as the Wild Atlantic Way, however, will eventually be “the making of Ireland”, Walton believes.

That evening, I arrive in Westport, stay at the Helm Bar and Apartments. The place is buzzing with golf tourists. Shane Keogh, of the family that owns the Helm, explains that they have become one of the biggest organisers of inbound golf tourism in the region.

“We bring up to 3,000 golfers through the area. We put a package together for them, we sort out all the green fees and accommodate them. Golf is our main business.”

Next morning, Canadian Travis Zeray, the owner of Clew Bay Bike Hire, takes me out on the Great Western Greenway for a cycle. He has opened five rental shops along the 42 km route, rents out hundreds of bikes, and employs more than 20 staff. He will expand further if more greenways are opened in the west.

“We are really busy from St Patrick’s Day right up through October. I would do more business and offer better prices if we were eligible for the 9 per VAT rate.”

It is ironic that cycle hire doesn’t qualify for the tourism rate, as Clew Bay won Mayo Tourism Business of the Year in 2015.

At Westport House, in the centre of the bustling town, sales and marketing director Biddy Hughes explains that domestic tourists still account for about “75 per cent of the mix” for the stunning period property and estate.

“But we have doubled our visitor numbers to 160,000 through the recession by partnering with other businesses and stretching our marketing budget.”

Hughes says the 9 per cent rate, and keeping a lid on staff costs, are vital for Westport House, which is currently at the centre of sensitive sale negotiations with the State over its future.

On Thursday: Mark Paul takes the temperature of tourism in Ireland’s Ancient East