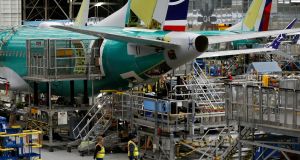 Employees walk by the end of a 737 Max aircraft at the Boeing factory in Washington. Photograph: Lindsey Wasson/File Photo/Reuters

Boeing’s attempts to get the 737 Max back in the air have suffered a further setback, after test pilots found a new potential flaw with the aircraft involved in two recent fatal accidents.

Test pilots for the US Federal Aviation Administration, who have been examining Boeing’s software fix for the anti-stall system implicated in the crashes, last week found a new potential problem, according to people briefed on the situation

The FAA has told Boeing to correct the problem before it subjects the aircraft to a precertification flight, a formal test run that would allow the plane to be cleared to fly passengers again.

According to the person, the system will not undergo that test flight until July 8 at the earliest - another setback for the company whose regulator initially indicated the aircraft could be approved to resume flights earlier in the summer.

Boeing has been trying to get its global fleet of 400 737 Max jets back in the air since March, when every airline regulator in the world grounded them following the second of the two accidents which killed a total of 346 people.

The company, which has said it lost $1 billion in revenues during the first three months of the year as a result of the Max being grounded, has been working on a software fix to the MCAS anti-stall system and possible changes to pilot training.

A spokesperson for the FAA said the agency “will lift the aircraft’s prohibition order when we deem it is safe to do so. We continue to evaluate Boeing’s software modification to the MCAS and we are still developing necessary training requirements...On the most recent issue, the FAA’s process is designed to discover and highlight potential risks. The FAA recently found a potential risk that Boeing must mitigate.”

A Boeing spokesperson said the FAA had “identified an additional requirement” during its review of the Max software update and recent simulator sessions that it had asked the company to “address through the software changes that the company has been developing for the past eight months”.

Boeing added that addressing this condition “will reduce pilot workload by accounting for a potential source of uncommanded stabiliser motion”.

Two people who have been briefed on the most recent delay said the issue occurred when FAA test pilots put the new software through various simulator scenarios. In one of those scenarios, one person said, the on-board computer appeared to become overwhelmed, and it took too long for the pilots to be able to regain control.

As the delays mount, at least one airline has decided to cancel further flights involving the Max. United Airlines said on Wednesday it would pull the Max from its schedules until September 3rd, having already done so for June and July. The company said the latest delay would affect around 1,900 flights.

Speaking earlier in the day, Dennis Muilenburg, Boeing’s chief executive, said he was hoping the aircraft would be recertified by the end of the summer. Speaking at the Aspen Ideas Festival in Colorado, Mr Muilenburg added the company was making “good, steady progress” on the work.

“We’re now in the process of certification with the FAA and regulators around the world. They’ve done simulator certification sessions. As soon as we complete that phase we’ll schedule a certification flight and then we’ll get the fleet back up and flying,” he said.

Meanwhile, airlines and aviation safety regulators met on Wednesday in Montreal to discuss what steps would be necessary to allow the safe return of the Max to the skies. – Copyright The Financial Times Limited 2019