EU warns US over Norwegian Air’s request for flights permit 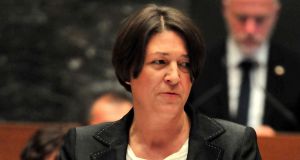 European Union transport commissioner Violeta Bulc: “We should carefully consider the implications that this long and protracted dispute could have, for example, in the Transatlantic Trade and Investment Partnership negotiations.” Photograph: Igor Kupljenik/EPA

European Union transport commissioner Violeta Bulc has warned Washington the row over Irish-based Norwegian Air International’s bid to a get a US licence could damage transatlantic trade relations.

Norwegian wants to launch services to Boston from Ireland but the US department of transportation has yet to grant it permission allowing it to fly there. As an Irish-licensed airline, it is entitled to a foreign carrier’s permit under the EU-US air transport agreement.

In a letter written this week to US transportation secretary Anthony Foxx, Ms Bulc said she and her EU colleagues were concerned about the “consequences that this matter could have, not only in our aviation relations but in the overall economic and trade transatlantic agenda”.

She hinted that the delay in granting Norwegian’s permit could have implications for the current trade talks between the two blocs.

The dispute has been dragging for more than two years, since Norwegian first applied for the permit. The commissioner’s letter confirms she has formally requested that the issue go to arbitration.

The Irish airline’s parent, Norwegian Air Shuttle, established it in the Republic so it would benefit from the air transport agreement, which allows EU airlines full access to the US.

It wants to launch a long-haul airline offering cheap flights from Europe to the US and Asia, which will include services linking Cork and Shannon with Boston and New York.

However, the deparment of transportation has stalled on granting it the permit in the face of pressure from rival airlines and trade unions, such as Delta and the Air Line Pilots’ Association.

The US “tentatively” approved Norwegian’s application in April but sought final submissions from all interested parties. However, the department of transportation has made no move since then.