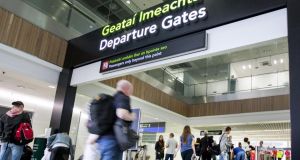 Airports Council International Europe (ACI) said passenger numbers at Dublin grew 13.4 per cent in the six months to the end of June.

The increase ranked the Irish hub as the fastest growing among Europe’s group-one airports, that is those catering for 25 million-plus passengers a year.

Dublin became a group one airport in 2015 when it handled 25 million passengers for the first time. Current growth points to the airport exceeding that number this year.

ACI published its figures at the same time that the Irish Aviation Authority (IAA) confirmed that traffic at two of the three State airports was up last month.

Overall flights to and from the Republic and through its airspace grew 9 per cent to 109,806 in July, according to the IAA. Traffic handled by the authority so far this year stands at 637,849.

Dublin Airport managing director Vincent Harrison confirmed that it accommodated more than 13 million passengers in the first half of this year.

“The significant growth in passenger numbers meant that more than 1.5 million extra customers travelled through Dublin Airport in the first six months of the year,” he said.

Mr Harrison claimed that the airport’s growth is benefiting the wider economy as it is increasing trade and tourism.

A 2015 study by consultants InterVistas shows that Dublin Airport supports 97,400 jobs and contributes €6.9 billion to the economy.

Confirmation of the airport’s strong performance came as its manager, State-owned DAA, began seeking bids for the main contract to build a new runway there.

Work on the €320 million project is expected to begin late in the first half of next year and should be finished by 2020.

The number of passengers travelling through European airports rose 4.9 per cent in the first half, according to ACI.

Growth in the EU alone was 6.2 per cent, although this varied, with central European countries such as France and Germany underperforming, and the likes of Ireland and Spain increasing strongly.

However, Olivier Jankovec, ACI Europe’s director general, warned that the figures hid a “slump” in demand in the non-EU bloc, particularly Turkey and Russia.

“In both cases, these worrying trends are due to the impact of terrorism and accrued geopolitical instability,” he said.

“Since these traffic figures do not yet reflect the full impact of the Istanbul-Atatürk airport terrorist attack and the failed coup in Turkey, we expect a further worsening of airport traffic performance over the summer and for the remainder of the year.”