Daimler to sell truck that can brake, accelerate and steer on its own 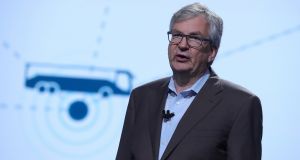 Daimler will start selling a heavy-duty truck in the US this year that’s able to brake, accelerate and steer at all speeds on its own.

This will coincide with the planned launch of electric-car leader Tesla’s Semi truck, which will stoke competition at a time when demand in North America is forecast to soften.

Taking the next step toward more automation could help freight haulers manage the strain of rising deliveries from online shopping amid a persistent shortage of drivers. But investments required to overcome technical hurdles are substantial.

The updated Freightliner Cascadia, which also will have lane-keeping assistance, fuses information from radar and cameras to enable partially autonomous technology, Daimler said Monday at the CES in Las Vegas. To maintain its lead over the likes of Volvo and Paccar, the manufacturer said it plans to offer within a decade highly-automated vehicles, which don’t need drivers, on some routes.

Success in North America is vital for Daimler’s commercial-vehicles unit to expand sales and profits after global deliveries topped 500,000 last year, the highest in a decade. Daimler’s truck division has struggled for years to lift returns beyond those of some smaller peers with fewer economies of scale and now is contending with rising expenses in self-driving and electric trucks as well as digital services.

Demand in the region is expected to moderate somewhat during the second half of this year, Roger Nielsen, the division’s North America head, said in Las Vegas. The world’s biggest commercial-vehicle maker still expects “another great year” as orders remain strong, he added. The market will reach a peak in 2019 after climbing to the highest level since 2006, according to Bloomberg Intelligence estimates.

The parent of luxury-car maker Mercedes-Benz is currently working through its biggest corporate overhaul in a decade to give individual units more independence. Investors have called for a partial listing of the commercial-vehicles division.

“There’s currently no need for a share sale,” Mr Daum said in an interview. “The change of the corporate structure is mainly aimed at becoming more flexible going forward.” Joint development of self-driving technology is actually underscoring the potential for close internal cooperation between the car and truck units, he said.

Daimler’s truck division is investing €500 million over the next few years in autonomous technology and is adding 200 jobs for the project, mainly in the US. Mr Daum said he doesn’t see a business case for so-called platooning any more, where two or more trucks are digitally coupled behind one another at a short distance to save fuel. This marks a change in strategy after the company worked on this technology for years.

Efficient allocation of funds will be needed to keep Volvo’s Mack brand, Paccar and Navistar at bay as Tesla aims to replicate with trucks its rapid expansion in the U.S. luxury-car segment. The Palo Alto, California-based company plans to start delivering heavy-duty electric models this year to customers including Walmart Inc. and PepsiCo Inc.

“We take all competitors seriously, but one can’t conquer the market with just one truck. We have thousands of different vehicle variants,” Mr Daum said. “We’re far ahead of Tesla in electric trucks. They have to come a long way.” – Bloomberg