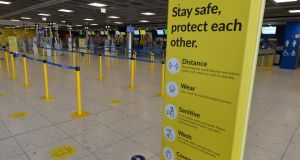 A key DAA executive told TDs and senators he was not personally aware that welfare inspectors were quizzing passengers arriving at Dublin Airport.

The Government has cut pandemic unemployment payments to more than 100 people who travelled abroad following checks at airports.

Ray Gray, chief financial officer at DAA, told the Oireachtas Special Committee on Covid-19 Response, that he personally was not aware of Department of Social Protection officials questioning passengers at Dublin Airport.

He pointed out that various State agencies, including Customs and the Garda, were normally active in the airport.

Mr Gray stressed that the company, responsible for Cork and Dublin airports, did not collect personal information from passengers and complied fully with the EU’s General Data Protection Regulation (GDPR).

“I do believe that DAA is doing, in both Cork and Dublin airports, everything to fulfill its obligations to its customers,” he said.

Mr Gray pointed out that the airports company did not police the collection of data by other organisations. He added that there were rules governing this activity for both businesses and State organisations.

Mary Considine, chief executive of Shannon Group, said that Shannon Airport complied fully with GDPR and did not collect personal information from passengers.

Committee chairman Michael McNamara asked that DAA clarify whether it was aware that Department of Social Protection officials were operating in the company’s airports within 48 hours.