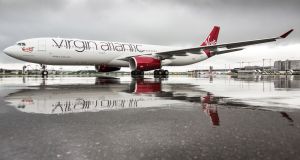 Richard Branson’s Virgin Atlantic Airways told a London court that it will run out of cash next month unless it secures approval for a £1.2 billion (€1.33 billion) rescue package announced in July.

Without the funds, available cash will drop to about £49 million by late September, below the £75 million specified in bondholder contracts, Virgin told a judge Tuesday. That would require the sale of Heathrow airport slots against which the bonds are secured, forcing the carrier to fold.

Virgin Atlantic said it obtained an order from the court to convene four creditor meetings on August 25th to vote on the restructuring as part of a process that will bind all debt classes to the rescue plan. The carrier said that creditors in three of the groups have agreed in advance to back it.

“With support already secured from the majority of stakeholders, it’s expected that the restructuring plan and recapitalisation will come into effect in September,” a spokeswoman said. “We remain confident in the plan.”

The restructuring must be approved at a hearing scheduled for September 2nd, after the creditor meetings, or will be placed into administration mid-month with any assets sold, David Allison, a lawyer for the company, told the court.

Virgin Atlantic unveiled the rescue plan on July 14th after the coronavirus crisis shut down flights and the carrier was told that its credit ratings disqualified it from support through a state-backed loans programme.

Under the proposals, US hedge fund Davidson Kempner Capital Management will provide about £170 million in secured financing, while Mr Branson himself will contribute £200 million after raising money from space venture Virgin Galactic Holdings.

Among Virgin’s proposals for the creditor groups are a fully drawn $280 million revolving credit facility secured against aircraft and engines will become a term loan with a longer maturity and a margin that’s 1 per cent higher. One engine will be freed up to be used as security for a new $30 million facility.

The plane-leasing firms that own 24 Virgin jets will be offered three options: a 15 per cent cut in fees until September next year at least, an 80 per cent reduction for the full term, or the termination of leases and the return of aircraft in their current condition.

So-called connected creditors including 49 per cent shareholder Delta will get preference shares in return for capitalisation of money owed.

Trade creditors will take a 20 per cent haircut, with 10 per cent of the remaining balance paid in cash and the rest in quarterly sums through September 2022. Suppliers of goods and services critical to Virgin, such as airports, will be exempt from the proposals. – Bloomberg