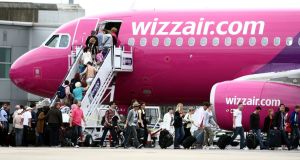 Budget airline Wizz Air said on Wednesday it was seeking a British flying licence in case there was no clean deal to protect flying rights once Britain leaves the European Union.

The European carrier said full-year net profit would be near the higher end of its guidance. But it was cautious on yields in the second half despite a record first quarter of the year.

Wizz Air, which is headquartered in Budapest, can continue to fly within the EU once Britain leaves in March 2019, but its flying rights in Britain after that date are less clear.

Chief executive Jozsef Varadi said the uncertainty meant the airline planned to put plans in place to protect flights. “If there is not an arrangement, then we are going to put contingencies in place, and one of those contingences is that we are looking at establishing Wizz Air as a United Kingdom-licensed airline,” Varadi told Reuters.

He said this would take place in the coming months.

The airline said full-year net profit would be at the upper end of its guidance range of €250 million to €270 million, helped by a strong performance over the Easter holiday and economic growth in Central and Eastern Europe.

The airline said there was little visibility in the second half due to fierce competition, with benefits from strong summer bookings countered by uncertainty over prospects for prices.

Analysts at Goodbody said it was positive after the results, and forecasted profit after tax at €278 million. It said Wizz was “erring on the side of caution” for the second.