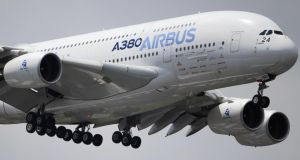 An Airbus A380 on a demonstration flight during the 50th Paris Air Show north of Paris this week. Photograph: AP Photo/Francois Mori

Airbus came within reach of its annual order target after adding almost $15 billion in sales on the fourth day of the Paris Air Show, prompting its sales chief to quip that he might take the rest of the year off. The European manufacturer pulled in deals worth almost $70 billion at the annual trade fair, including firm orders for 241 planes and agreements for 225 more.

Airbus’s target for the whole of 2013 is 800 orders, a goal the company said it is confident of exceeding having booked 758.

Airbus has won 69 orders and commitments for its new A350 wide-body, an aircraft which flew for the first time last week and which will make a fly-by appearance at the Paris event. – Bloomberg/Reuters