Aer Lingus in talks with Qatar Airways on Doha flights 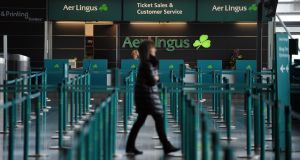 Aer Lingus is in talks with Qatar Airways, the biggest shareholder in its parent company IAG, about commencing flights from Dublin to Doha to connect with the Gulf giant’s Asian network.

The Irish airline, purchased by IAG in September, could serve the route itself or code-share on prospective Qatar Airways flights between the two locations, chief executive Stephen Kavanagh said in a briefing.

Qatar said in November it was examining the case for Dublin operations.

A pact between the carriers, which Mr Kavanagh said is “only a matter of time”, would boost competition with Dubai-based Emirates, Etihad Airways of Abu Dhabi and Turkish Airlines, which all already offer direct links with Dublin.

Aer Lingus’s own long-haul network has so far been focused on trans-Atlantic routes to the US.

“We will connect into the Qatar hub either on our metal or Qatar metal,” Mr Kavanagh said in the briefing prior to the International Air Transport Association’s annual meeting, which is being held in Dublin. “It’s certainly an opportunity to plug into the geographic advantage that Qatar has.”

Qatar Air last month boosted its stake in IAG, formed via a merger of British Airways and Spain’s Iberia, to 15 per cent, and said it would be interested in investing further.

Aer Lingus also plans to expand its US network in 2017, according to Mr Kavanagh, providing more flights to what he called “poorer” airports. The carrier commences services to Hartford, Connecticut, starting in September, and IAG chief executive Willie Walsh has said it’s being courted by other smaller bases.

1 Belgium helps Ireland to a Brexit boon
2 ‘My rent here is so low it’s a joke’
3 Can Grafton Street stop the flood of closures?
4 New Powerscourt Springs hotel to open in defiance of virus gloom
5 AIB to compensate another 1,100 tracker mortgage holders
6 This charming man: how Paschal Donohoe won the Eurogroup presidency
7 How to . . . move (almost) everything to your new phone
8 Bank of Ireland launches €200,000 prize fund
9 Government won’t name date for EV grants for car dealers
10 Goodbody loses a second suitor as Bank of China deal falls through
Real news has value SUBSCRIBE