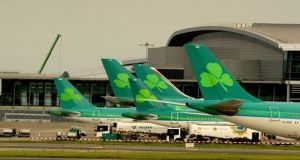 Aer Lingus wants to grow the number of passengers on its North American services from Dublin to 4.5 million by 2020. Photograph: Cyril Byrne/The Irish Times

Aer Lingus will have at least 24 aircraft flying transatlantic routes every day from 2022 as it pursues plans to more than double this business, according to chief executive Stephen Kavanagh.

The airline announced on Friday that it intends flying from Dublin to Seattle, Washington, in the northwestern United States, from next May, just weeks after confirming that it would add Philadelphia to its transatlantic network next summer.

Speaking at the Seattle launch, Mr Kavanagh said the carrier’s fleet expansion plans would, by 2022, give it “a minimum of 24 aircraft flying over the Atlantic every day”.

He said the airline would order a new Airbus A330 long-haul aircraft in coming months to boost frequencies on existing transatlantic flights from Dublin.

Mr Kavanagh indicated that the airline may also increase the number of flights on transatlantic services from Shannon Airport, from where it serves Boston and New York.

Aer Lingus wants to grow the number of passengers on its North American services from Dublin to 4.5 million by 2020 from an estimated 2.5 million this year. It has doubled this business since 2013, according to Mr Kavanagh.

Including Seattle, Aer Lingus will serve 12 North American destinations from next year. Since International Airlines Group bought the Irish carrier in 2015, it has added new services from Dublin to Miami, Los Angeles, Newark in New Jersey and Hartford in Connecticut.

Between 2019 and 2022, the carrier plans to buy 12 new Airbus A321 long-range places. These will be smaller and cheaper to run than traditional long-haul planes.

“They will give us the ability to open up new destinations that have not been served because of relatively low demand,” Mr Kavanagh explained.

The airline’s strategy is based on using Dublin Airport as a hub where passengers can transfer between European and US services.

Relations between Aer Lingus and airport operator, State-owned DAA, soured after the pair clashed several times over infrastructure at the Dublin gateway.

However, Mr Kavanagh indicated on Thursday that they had mended fences and confirmed that Aer Lingus, along with Dublin’s other airlines, is in talks with the DAA on possible infrastructure investment.

Airlines will have to pay for any developments they seek through passenger charges. DAA gave its airline customers proposals for its investment programme before the talks began.

“Our issue is the nature of the capital investment,” Mr Kavanagh said. “We are in constructive discussions on our needs as a hub carrier, which are very different from airlines doing point-to-point.”

Aer Lingus has said several times that it wants to see Dublin building more aircraft stands, boarding gates and taxi-ways to allow craft get to runways, and investing in the terminals.

Mr Kavanagh acknowledged that nobody expected the airport’s rapid growth in recent years, which is likely to see passenger numbers hitting close to 30 million this year.