Anti-terrorism ‘controlled experiment’ was done without airline or pilots knowing 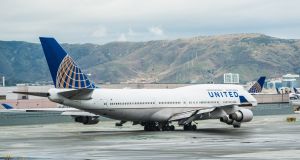 United Airlines Boeing 747: the aircraft was retired from service last week after a final trip to Hawaii. Photograph: Getty

It was the beginning of a new era of mass travel and tourism in 1969 when the illustrious jumbo jet made its first appearance. The Boeing 747, in its various guises and versions, was the workhorse of the US and worldwide skies for nearly 50 years. Now, slowly but surely the aircraft is being phased out. Just last week United Airlines waved goodbye to their 747 fleet with a farewell flight to Hawaii. Delta will say goodbye the its last “queen of the skies” on December 15th when flight DL159 departs Detroit for Seoul and returns to retirement on December 17th. Aer Lingus took delivery of their first 747 in 1971 and the aircraft operated until a final flight in October 1995.

Of greater concern, however, is news that a US Department of Homeland Security team managed to hack a Boeing 757 without the airline or pilots knowing. The “controlled experiment” by a team of experts working with the department in charge of public security and anti-terrorism involved hacking the plane remotely. The team exploited the aircraft’s wireless communications to access its internal network. Robert Hickey, aviation programme manager at the department’s Cyber Security Division, revealed details of the hack, which was launched last year, at the CyberSat Summit last week. It took the team only two days to develop a strategy for the hack. “We got the airplane on September 19th, 2016. Two days later, I was successful in accomplishing a remote, non-co-operative penetration,” he said.

Meanwhile, congratulations are due to Ethiopian Airlines which received a four-star grading from Skytrax. The international air transport rating organisation uses a scientific approach to assess airline standards. Other airlines with a four-star rating operating from Ireland are Aer Lingus, British Airways, Emirates, Finnair, Iberia, KLM/AF, Air Canada and Swiss. There two five-star airlines operating from Ireland: Etihad and Qatar.

The landmark of the New York hotel scene, the Waldorf Astoria closed its doors on Wednesday in advance of a major renovation. The hotel was bought by China’s Anbang Insurance Group for nearly $2 billion in 2015. The hotel will be completely changed with the 1,400 rooms being reduced to 350. The balance will be remodelled to provide suites and condominiums.