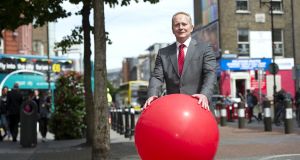 Paul Price, of Big Red Button: “Being accepted as a high-potential start-up by Enterprise Ireland made it feel like we were really on to something and that it was worth sticking with it.” Photograph: Maura Hickey

Just over two years ago everything was on track for the launch of Paul Price’s new business, Big Red Button. The idea had been three tough years in the making and Price was elated that the final pieces were about to fall into place. Then, at the very last minute, the wheels came off. The call centre Price had chosen to handle his company’s business discovered a logistics glitch and couldn’t provide the service he needed.

“It was a complete body blow,” he says. “So much time and around €150,000 had gone into integrating systems and making sure everything worked. Suddenly all bets were off. Getting to the starting line had been a huge battle, and you end up asking yourself if you’re a fool following a dream and putting everyone and everything you have at risk for it. There was a lot of self-doubt at this point.”

Lesser mortals might have folded up their tents, but with a family to support and a business so close to its commercial launch, Price decided to regroup. He set about finding another call centre, and roughly six months later got lucky with a long-established company in the UK that had ample capacity. It then took another six months to nail down all of the detail.

“I knew I had a high-functioning prototype and that the system was robust and scalable,” he adds. “But at the time there were a lot of sleepless nights over whether we could solve all the problems presented by this setback. I suppose what kept me going is that other people could see merit in the idea, and I’m also a very determined individual.”

Big Red Button is a personal safety system that uses a smartphone app to summon help if the user feels unsafe or is in trouble. The app is activated with a single tap and the call, which also gives the person’s exact location, goes straight to the support team. Depending on the situation, the operator calls the emergency services or a parent or friend and stays on the line until the person is safe.

Price got the idea for the business when his teenage son was attacked on a night out.

“He called us, but we were too far away to help,” Price says. “We had to hang up and ring around to find someone closer to him. When we rang back, his line was engaged and we were frantic. For everyone involved, not being in constant communication was very stressful.

“There are lots of times when people feel unsafe: waking somewhere quiet and dark, waiting alone for public transport, or feeling someone may be following you. From our research, we know that teenagers and students in particular don’t want to worry or wake their parents if there’s a problem. With Big Red Button we know who you are, so there is the reassurance of being called by name and knowing there is someone to take your call 24/7, 365 days a year.”

Price is a chartered accountant who worked with KPMG before moving to London in the 1980s. A decade later he co-founded a structured finance business in the IFSC, and all went well until the crash.

“It was an exciting and interesting business to be in,” he says. “But then things started slowing down and eventually stopped, and our business was basically blown away.”

Not one to sit around, Price then spent time in his father’s business, Insight Cards, before helping to negotiate a trade sale.

Price began looking seriously at the idea for Big Red Button in 2011.

“The nightmare of what happened to our son had stayed with me and I’d noticed that emergency pendants for older people had become popular. And I thought, why not have something similar for kids, and indeed for adults, who might feel vulnerable at some point? There are lone-worker devices available, but they are very expensive, and there were also issues around how to link any system to an emergency response.

“It took about a year to tease out what was do-able at a technical level at an acceptable price, and an app linked to a pop-up screen at a call centre seemed like the best option.”

Price, who was living on his savings at the time, raised an initial €70,000 from friends and family to get things going. This was followed by a second round of funding to raise €150,000, which was matched to the tune of €135,000 by Enterprise Ireland.

“There were times when I thought I’d be better off looking for gainful employment, but being accepted as a high-potential start-up by Enterprise Ireland made it feel like we were really on to something and that it was worth sticking with it,” Price says. “The big potential overhead was the support centre. Our estimate put the minimum cost at €50,000 a month before we generated a single euro in sales. This was why we decided on outsourcing. It’s also vital that the centre has enough manpower to have calls answered immediately. It’s not acceptable to have calls queued.”

Price is now on a mission to promote the service, which is currently available for iPhones, with an Android version to come. The cost is €9.99 a year and there is a charge per call based on duration. Price has already had interest in his idea from Australia and the US, and there is a willing investor waiting in Hong Kong to roll out Big Red Button in China.