Karlin Lillington: Having lost a protracted legal battle in the UK, Uber is now trying to lobby EU 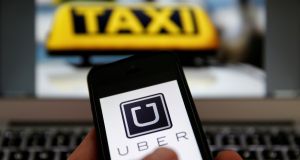 Last week, Britain’s highest court recognised Uber drivers as workers entitled to a range of rights and benefits – from Uber.

In a momentous decision that will reverberate across many sectors of the world’s gig economy (including in Ireland, even though Uber does not operate here), the court determined that Uber’s drivers were not, as Uber had argued in its lucrative UK market, independent contractors that simply use Uber’s platform as a convenient way to supply a service.

Uber would have you understand it employs programmers, but not drivers. What drivers use is its platform app – a technological intermediary between people who want to get somewhere, and the drivers who will take them.

Uber is therefore a “ride hailing company”, digital era nomenclature that avoids the inconvenient phrase “taxi service”. A “platform” is neutral and non-specific. Except, of course, when a national court says no, you aren’t just a technological intermediary when you define and control much of the actual work experience.

In a statement, the UK court explained that it did not accept Uber’s argument that drivers had the same kind of flexibility and self-determination as freelance professionals engaged in contract work (who really shouldn’t even be in the gig worker category, generally understood as a low wage, low skill area but, rhetorically, it suits the big platforms to have them there, evoking high income independence).

The court noted that “the transportation service performed by drivers and offered to passengers through the Uber app is very tightly defined and controlled by Uber. Drivers are in a position of subordination and dependency in relation to Uber such that they have little or no ability to improve their economic position through professional or entrepreneurial skill”.

“In practice the only way in which they can increase their earnings is by working longer hours while constantly meeting Uber’s measures of performance.”

Uber is telling its thousands of other UK drivers not involved in this specific case that this decision, alas, does not apply to them because Uber has changed some terms of service since those cases were initially taken.

But numerous legal experts in the UK have disputed this. More workers are lining up to take cases, so we’ll get an answer sooner rather than later.

Notably, because the UK has left the EU, Uber has nowhere to appeal the supreme court decision. Plus, other gig workers are taking similar cases on work conditions in the UK and elsewhere, so this issue isn’t disappearing.

Lest anyone underestimate the value of keeping gig economy workers in their largely powerless place, recall that Uber and Lyft invested $200 million in California to (successfully) pass Proposition 22 last year. It was the most spent, ever, to lobby California voters on a ballot initiative.

That state ballot proposition – written by the companies – overturned a protective framework the California legislature had provided to gig economy workers, based on employment rights not dissimilar to those the British court just gave Uber drivers.

But beware. Uber is offering a euro-fication of Prop 22. The company just launched a White Paper in Europe that’s basically Prop 22 for Europe. It’s a public lobbying effort landing now, at the start of an EU process to consider the gig economy and decide whether its workers need supports such as better working conditions and pay.

Europe seems inclined to say yes. A year ago, the EU published a huge report on platform workers, which highlighted “challenges” such as “employment status, information available to the workers about their working conditions, dispute resolution, collective rights and non-discrimination”.

Half of online platform workers earn less than $2 per hour

And this week, the United Nations’ International Labour Organization put out a report on platform work, which noted its opportunities and, once again, its “challenges”.

The opportunities lie in flexible work, sometimes in the home, to women, people with disabilities and marginalised groups that too often fall outside the standard employment net.

The challenges “relate to working conditions, the regularity of work and income, and the lack of access to social protection, freedom of association and collective bargaining rights. Working hours can often be long and unpredictable. Half of online platform workers earn less than $2 per hour. In addition, some platforms have significant gender pay gaps,” according to the report.

What a surprise to see this pairing. Imagine that: a potential labour market of people whose voices are regularly ignored by society, who routinely fail to get a fair crack at conventional job opportunities, then somehow end up in platform workforces that unfortunately regularly feature such exploitative “challenges”.

And don’t forget society’s complicity. In the name of cheap services, people turn a blind eye to gig economy injustices. Exploitation suits busy middle-class lives. Society – voters – accept de-facto industry self-regulation in the form of Prop 22 and its like (but notably, not in their own jobs). Cheap is so easy when you get rid of actual employees.

So, yes, EU and international standards in this area are much needed. The time has come for comprehensive and fair gig worker legislative protections, rather than the years-long, drawn out, piecemeal legal battles currently filling the void.