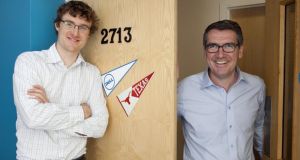 Web Summit founder Paddy Cosgrave and Dell’s president of EMEA Aongus Hegarty outside the door of Room 2713 - the dorm room where Dell began. The PC giant will recreate the university dorm room at this year’s Web Summit.

Mr Brunetti produced the film The Social Network, the story of how Facebook was created. He is also the president of Trigger Street Productions, a production company founded by Kevin Spacey in 1997, and more recently he has been the executive producer of hit Netflix series House of Cards.

As well as being the chief technical officer of Alcatel-Lucent, Mr Weldon is also the president of Bell Labs.

The opening day of the Web Summit next Tuesday will see American stock exchange Nasdaq opened remotely from Ireland.

Mr Cosgrave said it would be one of the few times the Nasdaq opening bell will be rung outside the US this year, and marks the fact that the Web Summit is Europe’s largest tech event. The world’s biggest technology firms, including Google, Facebook and Microsoft, are listed on the Nasdaq.

The Web Summit will also see PC giant Dell recreate the university dorm room in which the company was founded by Michael Dell in 1984.

The mock dorm room will play host to “pitch perfect” coaching sessions, where senior Dell executives will give feedback and advice to the 200 start-ups shortlisted to take part in the Web Summit’s pitch competition.

Workshops on a range of topics relevant to entrepreneurs, including how to manage customer segmentation and how to scale a company for growth, will be offered in the dorm room.

Some 20,000 people are expected to attend this year’s event in Dublin from November 4th-6th.

Over the past three years, Skype founder Niklas Zennström, Netflix founder Reed Hastings, Twitter founder Jack Dorsey, Tumblr founder David Karp and Elon Musk, founder of Tesla, SpaceX and PayPal, have been among the speakers at the event.