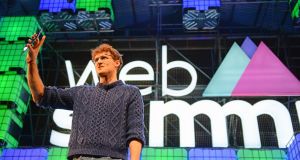 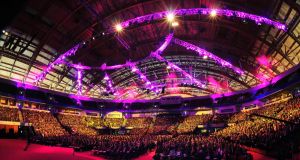 Parque das Nações, to the east of Lisbon, is a vast complex at the edge of the city that shot to prominence when it was named as the new venue for the Web Summit.

The 2016 Web Summit will be a different affair from previous years, not least because it is the first year the event will not be held in Ireland.

In a blaze of publicity ahead of last year’s event, co-founder Paddy Cosgrave announced the event, which began in Dublin in 2009, would move to Lisbon.

The reasons were spelled out: the facilities in Dublin just didn’t have the capacity that the co-founders thought were necessary to grow the Web Summit.

Wifi, hotels, transportation and conference space were among the chief complaints.

It seems a long time has passed since the Web Summit was called the Dublin Web Summit, changing its name after the 2011 show to reflect, perhaps, the organisers’ future ambitions.

Its humble roots saw 400 attendees in a single room; by 2011, there were more than triple that number, and it grew exponentially.

In 2015, there were about 40,000 people at the Web Summit, which was held over two halls in Dublin’s RDS. The move to the MEO Arena and the Feira Internacional de Lisboa (FIL) in Lisbon will allow the capacity to increase to 80,000 attendees over time.

That is bigger than any venue in Ireland could accommodate, and the Web Summit organisers know it. In fact, we all know it.

So, off it goes to Lisbon, an up-and-coming tech hub and potential competition for Ireland’s ambitions for tempting start-ups.

The final total won’t be known until after the event has ended and all tallies are compiled.

But despite the change in venue, the organisers are taking at least some of the elements of the Web Summit with them.

The pub crawls – a feature of the summit while in Dublin – will carry on in Lisbon.

Lisbon’s fado bars replace the snugs while there’ll be caipirinhas instead of Guinness, but organisers are promising the same networking opportunities and atmosphere that made the Dublin-based events popular.

There are plenty of tales of deals being done and contacts being made while on the Web Summit crawls, but the chances of meeting Bono this time around are probably a bit lower.

The Night Summit swaps Dublin’s city centre for Bairro Alto, and Fade Street for Pink Street, which lives up to its name with its pink asphalt. Surf Summit is back too, with picturesque Sligo making way for Ericeira – about 35km outside Lisbon.

But the Food Summit, the showcase for Irish food producers, appears to have fallen by the wayside, at least as a separate event. It’s not one of the 21 conferences listed on the event’s official page; the Night Summit and Pub Summit, on the other hand, are.

The hopes are that the new Lisbon home for the Web Summit will also put to rest the wifi issues that plagued the final years of the event’s Dublin tenure.

The main sponsor of the main building at “the Expo” – a term commonly used to refer to the Parque das Nações area of Lisbon – is telecoms firm MEO, leading to the assumption that the infrastructure may hold up to the strain of 50,000 people trying to log on at the same time.

That will remain to be seen, however, although managing director of the arena Jorge Vinha was upbeat about its chances when he spoke to The Irish Times in the wake of the decision to relocate the event to Lisbon.

It’s not just about pub crawls and wifi, though.

The Irish will still be out in force at the event, although the extra cost of travel will undoubtedly have put some off.

According to the organisers, there are more than 3,000 Irish people attending the event.

Out of 50,000 people, that is 6 per cent, a figure that is sure to have taken a hit by virtue of the fact that, for many, it is no longer in their backyard.

But, given the higher attendee numbers being publicised by the Web Summit, it appears as though others have come in to take their place – and then some.

On the Web Summit’s website, there are 30 Irish companies on the list of featured start-ups, including Aylien, WeSavvy and Bizimply.

GD Seventy Eight Music is another Irish firm taking part in the ALPHA programme at the Web Summit.

Founded in May, the company touts itself as the music label of the future.

It offers an app, Signed, that the average music lover can download and use to become a talent scout. If you find an act you like, you can submit it to GD78 and, if they go on to become successful, you can snag yourself a share of the royalties or end up working for the company.

The company describes the Web Summit as “the most relevant tech event for business start-ups in Europe”.

However, it’s not just start-ups that are making their way to Lisbon.

Intercom, the Irish technology company that has been working to transform how businesses communicate with customers, will hold a private event on the fringe of the conference – with co-founder Des Traynor speaking at the F.ounders event which goes hand-in-hand with the main tech conference.

Cork-based Voxpro will also attend, with founders Dan and Linda Kiely heading for F.ounders, and CurrencyFair co-founder Brett Meyers will speak at MoneyConf on the first official day of Web Summit.

Oisin Hanrahan, the Irish founder of US-based Handy, is also on the lengthy speakers’ list for the Web Summit.

Last year, Dublin events company Catapult designed stages at the Web Summit. This year, it is heading out to Lisbon for more of the same, meaning Irish companies are still an integral part of the organisation.

And that’s not even taking into account the company behind Web Summit and a number of other conferences, Ci, which is Dublin-based and will remain so for the forseeable future at least.

In the meantime, a number of events have tried to fill the gap left by the tech conference event, including the Dubin Tech Summit, which is scheduled to take place in Dublin’s Silicon Docks in February.

The German tech conference re:publica came to Dublin in October, in a joint event with film and tech forum Digital Biscuit.

Then there’s events such as the sci-tech and arts festival Inspirefest, which is sticking with its boutique festival spirit, and is now going into its third year. It’s not trying to replace the Web Summit, but offers a different perspective.

The Web Summit is not something that can easily be replaced by a single event but, like all things that outgrow their roots, it was time to move on.

Now, it’s over to Portugal.

1 ‘My rent here is so low it’s a joke’
2 This charming man: how Paschal Donohoe won the Eurogroup presidency
3 ‘Sad day’ for House of Ireland as tourism retailer goes out of business
4 Goodbody’s planned €155m sale to Bank of China falls through
5 Business ‘will not survive’ on essential-only travel - task force
Real news has value SUBSCRIBE