Valuations are skyrocketing in the Valley but will it end in tears? 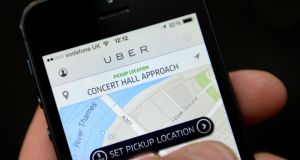 Uber may possibly end up justifying its huge valuation but the same “ubernomics” is being applied across the board, even though many start-ups will not succeed. (Photograph: Andrew Matthews/PA Wire)

The $41 billion valuation for the car-sharing service Uber may or may not be a bubblicious number, but it certainly shows that the venture capital industry is in a bad place.

To understand, you need only peruse the startling valuations of other companies that have received venture capital funding in only the last few weeks. Here are some of them:

- Instacart, a same-day grocery delivery service based in San Francisco, began a $100 million fundraising round valuing it at $2 billion.

- WeWork Cos., a company that provides shared office space (think Uber for offices), closed a $355 million funding round valuing it at $5 billion.

- Stripe, an online payment company with Irish founders, completed a $70 million investment round that valued it at $3.5 billion, double its $1.75 billion valuation earlier this year.

- Kabam, a mobile games maker, announced that employees and investors were selling $40 million in shares to a group of investors.

After an earlier round of investment last summer, the company was valued at more than $1 billion, up from $700 million last year. What do these four companies have in common, beyond the fact you probably haven’t heard of them?

For starters, these companies didn’t exist a few years ago and are now worth more than $1 billion. They are also example of how valuations are skyrocketing in Silicon Valley as startups are priced for perfect execution, something which almost never happens.

The trend spreads far beyond the names you know, like Uber and Snapchat. It is not just about apocalyptic valuations. Companies are going from zero to billion-dollar valuations faster than ever before, despite a lack of revenue and, perhaps, even a market plan.

In the frenzy, ideas that once were discarded as failures are being recycled into billion-dollar startups. Remember, same-day grocery delivery is nothing new. Kozmo.com and Webvan were same-day delivery services that failed when the dot-com bubble burst, losing hundreds of millions of dollars.

Yet Instacart, a company with service in only 15 areas, is hurtling toward a valuation in the billions. The high valuations have gone beyond old ideas and new ones that want to be the Uber of office space or dry cleaning.

In the past few weeks, Vox Media, the Internet media startup, closed a funding round that valued it at $380 million, $130 million more than Jeffrey P. Bezos paid for The Washington Post, while Change.org, the online petition service, raised $25 million at an undisclosed valuation from a number of investors, including Microsoft co-founder Bill Gates, Yahoo co-founder Jerry Yang, Twitter co-founder Evan Williams and others.

When media startups can raise millions just because they are new companies, rather than the old struggling ones, you know the froth has spread. It is easy just to dismiss all this as another bubble driven by Silicon Valley executives. These executives live in their own, well, bubble. They are pushing up Bay Area housing prices with their newfound wealth and thinking that they can change the world if we would only listen to them.

Yet something more nuanced is going on. To understand, you need only to look at Uber. The company is a rocket, no doubt. In less than five years, it has reached a $41 billion valuation. About six months ago, it was valued at $18 billion. This valuation exists even though all the revenue from the taxi industry in the United States is only about $11 billion a year. Uber is also being banned in some countries like Spain, has a bad public relations problem of late, and the business is at heart a commodity that anyone can mimic.

Not only that, but taxis are fighting back by starting their own app services and there are significant competitors like Lyft. With all of these issues, the only way that the Uber valuation works is as a bet that Uber will be able to induce more people to take taxis, expand to ride-sharing and even replace cars.

Still, this bet supposes that Uber is a category killer and that only the biggest, fastest growing company will survive. Bill Gurley, a partner at Benchmark Capital, which is an Uber investor, used just this argument to justify the fat valuation. In other words, Uber will change the way we get taxis as well as how people and things get from here to there. These are tremendous assumptions, which led the guru of tech valuation, Aswath Damodaran, a finance professor at New York University’s Stern School of Business, to come at a huge range for Uber’s valuation.

Depending on how much of the market Uber could capture, Damodaran estimated that Uber’s valuation was $799 million to $90.5 billion. He then threw up his hands and asked the readers of his blog to try to come up with a more certain value. It is clear that Uber is changing the way people use taxis and will make hundreds of millions of dollars, if not billions, if it doesn’t implode first because of mismanagement.

But again, Uber is being priced to perfection. And it is being priced based on a big bet of what the market share will be, similar to the old eyeball count valuations that were used to justify Yahoo’s multibillion-dollar purchases of Geocities and Broadcast. com. (Both failed.)

This isn’t to say that the venture capitalists aren’t correct. Uber may be a game-changer. And the hunt by Google, Facebook and others for new businesses is also pushing up valuations. This is all driving aggressive assumptions in the valuation of startups that are deemed to have a good idea. That may be a small number of firms. But they are setting off a valuation feeding frenzy.

Still, the spree of billion-dollar valuations in the past few weeks shows us that something more is going on. That is where the terrible business of venture capital comes in. In the last five years ending in 2013, according to Cambridge Associates, venture capital’s returns trailed the Standard & Poor’s 500 index by 5.4 percentage points, earning 12.5 per cent a year against the S&P 500’s 17.9 per cent. Venture capital trailed private equity firms even more, failing to justify the 10-year lockups and other fees that investors in venture capital funds must agree to. In this world, the top 10 per cent or so of venture capital firms, the elite, are the only ones that consistently perform well. That includes Andreessen Horowitz and Accel Partners. But even the storied Kleiner Perkins is struggling to keep up.

Yet every venture capital firm is trying to stay alive and in the game. And the only way to do so is to ride the herd and hope that you have the next Facebook or Uber. More than 40 per cent of venture capital’s investment so far this year was in software - mainly apps, according to the National Venture Capital Association. Venture capitalists are rushing to get in on the new, new thing, which just happens to be mostly apps and Uber knockoffs.

In this market, the crazy valuations are just the price of survival for venture capital firms. That’s how an online grocer like Instacart or WeWork can have billion-dollar valuations. These companies may have ideas that work, and if they do, the payoff is perhaps another Facebook. But more likely, everyone is overestimating market share and pushing assumptions to even get the privilege of investing.

So where does that leave us? It means that Uber may possibly end up justifying its huge valuation. Certainly, a lucky few in Silicon Valley will make billions of dollars. But the same Ubernomics is being applied across the board. It is impossible that all, indeed most, of these companies will succeed. And in the failure of these companies, some venture capital firms will be brought down, except for the lucky few that actually catch the successful Uber. There will be tears.