US business body warns not to box in multinationals 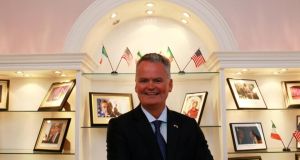 Mark Redmond, chief executive of the American Chamber said: “The legislation has to be really clear so businesses can understand and implement it.” Photograph: Nick Bradshaw

The American Chamber of Commerce has warned that new Irish tax incentives may fail because they do not match the needs of multinationals.

The chamber, which represents 700 US companies, has said the forthcoming Knowledge Development Box – which will replace the discredited Double Irish structure – should recognise the current operating models of most US multinationals and take into account the fact that many centralise the ownership of IP into a small number of entities.

The Knowledge Development Box, plans of which are due to be detailed by the Minister for Finance later this month, aims to offer tax incentives for companies to develop technologies and products in Ireland.

Further research and development activities on IP that are originally developed in the United States are then often decentralised and undertaken in a number of different jurisdictions.

The chamber said failure to consider these factors when designing the Knowledge Development Box may result in the introduction of a regime that fails to attract significant investment into Ireland.

“There is a significant risk that a Knowledge Development Box which is substantively based on a modified nexus approach will attract little or no US MNC investment in Ireland,” the chamber said.

According to the chamber, the Government must enhance the attractiveness of its tax regime to encourage US multinationals to own, develop and exploit their intellectual property from Ireland.

It also said the R&D tax credit regime and the Knowledge Development Box should not be interlinked.

Chamber chief executive Mark Redmond said the strength of the Irish-US economic relationship is at an all-time high.

“Foreign direct investment in Ireland went up by 42 per cent in the first nine months in 2013, whereas it went down by 19 per cent in the rest of Europe, ” Mr Redmond said. “We will have to raise our game with regard to research and development, to keep attracting investment.”

“The legislation has to be really clear so businesses can understand and implement it,” Mr Redmond said. “Businesses will need certainty that what they are doing is right and correct.”

In its response, the chamber also recommended that the Department of Finance constantly monitor the introduction of similar regimes – particularly within other EU countries – to ascertain whether the Knowledge Development Box, once implemented, needs to be further developed in order to be a “best in class” offering.

The chamber also noted that there are a number of significant practical issues in relation to the tracking and tracing of various income and expenditure.

“In this context, we believe that an advanced agreement process whereby companies can discuss the approach to be adopted with Irish Revenue in advance of claiming benefits under the regime,” it said.