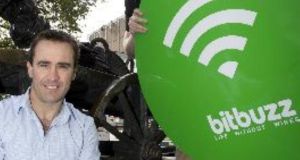 Broadband provider UPC Ireland is to acquire Irish-owned wifi company Bitbuzz for an undisclosed sum thought to be in the region of €5-€6 million.

Bitbuzz, which is headquartered in Dublin, specialises in offering wifi to the tourism, retail and leisure sectors, notably hotels and cafes in Ireland and Britain.

UPC Ireland chief executive Magnus Ternsjö confirmed the deal at a media lunch hosted by the company on Thursday.

He declined to disclose further details of the acquisition but said it would be a cash deal and that the wifi service would continue to operate under the Bitbuzz brand.

Bitbuzz founders Shane Deasy and Alex French are to leave the company following the acquisition.

Providing internet services via wifi has become increasingly competitive with a number of high-profile companies vying for market share.

UPC’s move is designed to strengthen the company’s presence in the hospitality, health and education markets, where Bitbuzz is prominent.

With Bitbuzz’s market position and UPC’s fixed-line capacity, the deal is perceived to deliver significant synergies.

Bitbuzz passed something of a milestone when revenues break the €1 million mark in the first half of this year.

Its managing director Shane Deasy said recently the company planned to hire about a dozen more staff by the end of the year as part of an expansion of its activities in Ireland and Britain.

1 How long can Government afford to keep State pension age at 66?
2 Guinness brings out a non-alcoholic version of the black stuff
3 Frank Fitzgibbon stepping down as Sunday Times editor
4 How much will a Covid-19 vaccine cost?
5 Farm lobby seeks EU ban on vegan ‘burger’ and veggie ‘sausage’
Real news has value SUBSCRIBE