Twitter posts losses of $65m as it prepares for NYSE float 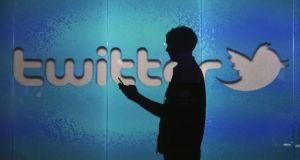 Twitter will list its shares on the New York Stock Exchange when the company goes public later this year. Photograph: Chris Ratcliffe/Bloomberg

Twitter will be coming off its biggest quarterly loss in the past three years when the online messaging service floats on the New York Stock Exchange later this autumn.

A regulatory filing yesterday revealed that Twitter will list its shares on the NYSE instead of the traditionally tech-friendly Nasdaq Stock Exchange.

The setback was the worst Twitter has suffered in any quarter since 2010.

A target date or a price range for Twitter’s initial public offering (IPO) has not been set yet, although most analysts expect the process to be completed before the end of November.

When trading in the shares does begin, it will be under the ticker symbol “TWTR” on the New York Stock Exchange.

The news is an upset for the Nasdaq, which has traditionally been the place for technology IPOs. The exchange was looking to redeem itself after last year’s Facebook’s IPO, which was marred by trading-order failures and delays.

As a result, the Securities and Exchange Commission in May fined the exchange $10 million, the largest ever levied against an exchange.

The NYSE has wooed a growing list of companies recently, including 10 of the 20 largest technology IPOs so far this year, according to research firm Dealogic.

Winning an IPO is always a big deal for an exchange, but a high-profile name like Twitter is an especially coveted prize.

As long as Twitter’s IPO goes well, it should give the NYSE an edge in luring other up-and-coming companies, particularly in the fertile area of social media.

“We are grateful for Twitter’s confidence in our platform and look forward to partnering with them,” NYSE spokeswoman Marissa Arnold said.

Twitter still has not posted a profit since it started as a side project within another start-up more than eight years ago. The company has now lost a total of $483 million in its brief history.

Some of those losses have been by design. Twitter held off on trying to generate revenue during its early years while management focused on making the service more reliable and widening its audience.

By some measures, the strategy has proved to be successful.

In a development likely to hearten prospective investors, Twitter’s revenue for the latest quarter more than doubled from last year to nearly $169 million.

Twitter ended September with 232 million active users, up from 218 million in June.

The company’s user growth has been slowing though. What is more, most of the traffic is coming from outside the US, including many less affluent countries that are not as attractive to advertisers.

The losses are starting to drain Twitter’s bank account, giving added incentive for the company to go public.

The company also added another 300 employees during the latest quarter to expand its workforce to 2,300 people.