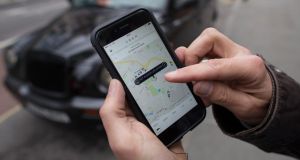 Uber will employ up to 300 people at the Limerick centre, which will support Uber’s operations outside the US. Photograph: Simon Dawson/Bloomberg

Taxi and ride-sharing company Uber is to create 150 jobs in Limerick before the end of the year in a new customer service operation in the city.

The US-based company said it plans to employ up to 300 people at the new centre, which will support Uber’s operations outside the US, by the end of 2016, providing a major boost to employment for the region. It is investing €4 million in the facility.

The Limerick operation is the first of the company’s “centres of excellence” to be located outside the US. According to Uber’s general manager for Ireland, Kieran Harte: “We’re thrilled Limerick is a city so open to an innovative company like Uber.”

Founded in 2009, Uber has a number of transport options, ranging from its UberBlack service, which uses executive cars and limousines, to UberX, provided by fully licensed taxis.

Recruitment for up to 50 roles is beginning immediately. Uber currently employs a handful of people in Ireland. The company has taken out a 10 year lease on a building on Thomas Street in Limerick for its Irish hub.

The roles will be mostly in customer service but will also include a mixture of administrative support, managerial jobs and financial roles.

“We’re excited to push it as hard as we can,” said Mr Harte. “It an aggressive recruitment target we’ve set for ourselves.”

He cited the quality of graduates coming from universities in the area as a reason for choosing Limerick as the location for the centre. Although qualifications in technology won’t be a requirement for customer-support roles, Mr Harte said candidates would need to have a handle on technology, and Uber is looking for university graduates.

Another thing the company is looking for is problem-solving skills, with potential employees not only helping to smooth things over for the Uber community users but also for Uber in the different markets it operates in.

“They’ll be helping the community but also working on how we can get processes a lot better in the cities,” said Mr Harte.

Uber employs more than 3,000 people around the world, operating in 329 markets. However, although consumers may be taking to the service, Uber has run into difficulties in markets where taxi services are heavily regulated.

Its unlicensed UberPop service has been banned in Italy and the Netherlands, while the company has also run into difficulty in Germany, Spain and France, along with Australia and Brazil.

The service was fined $7.3 million by the California Public Utilities Commission earlier this month for failing to provide detailed information about its operations, a ruling Uber said it would appeal.

1 Who are Ireland’s 17 billionaires?
2 Fianna Fáil may have just pressed the pause button on the property market
3 Are there annual limits on inheritances or gifts to a child?
4 My father in a nursing home wants to gift me his house
5 State subsidises public sector retirees to cover gap until State pension
Real news has value SUBSCRIBE