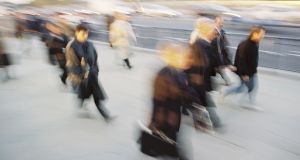 Cities around the world, including Dublin and Cork, have adopted smart city strategies to deliver improved services, traffic management and to tackle environmental challenges, for example. Photograph: Getty Images

Developing technologies and systems to create “smart cities” in Ireland poses challenges for people’s personal privacy that need to be addressed without stifling innovation, a new report says.

The report, named Getting smarter about smart cities: Improving data privacy and data security was published on Thursday to coincide with Data Protection Day.

It says the “haphazard” approach to the development of networked technologies for so-called “smart cities” cannot be allowed to continue without taking proper account of privacy challenges.

Cities around the world, including Dublin and Cork, have adopted smart city strategies to deliver improved services, traffic management and to tackle environmental challenges, for example. Limerick and Galway have also done some work on smart city projects.

But the report notes that such projects also generate large quantities of data about people and places, “much of it in real-time and in a highly detailed form”.

They may also incorporate smartphone apps that track a user’s location.

“Never before has so much information about people – their characteristics, their location and movements, and their activities – been generated. These data can be put to many good uses, but they also raise a number of issues with respect to data privacy, data protection, and data security,” the report says.

Written by Prof Rob Kitchin of the Programmable City project at Maynooth University, the report is the first publication by the Government Data Forum, a panel of experts drawn from industry, civil society, academia and the public sector.

The report also cautions against becoming “overly focused” on the negative concerns and harms lest they stifle innovation.

It says that while the concerns relating to smart cities are “significant”, we need to remain mindful of their potential benefits in producing “more efficient, productive, sustainable, resilient, transparent, fair and equitable cities”.

The authors recommend the establishment of advisory boards and governance and ethics committees to oversee such smart city projects.

An emergency response team should also be appointed to tackle cybersecurity incidents, where data was hacked or compromised.

Speaking at the launch of the report in Dublin, Prof Kitchin said that to date, the approach to privacy and security in the context of smart cities had been “haphazard and unco-ordinated”.

“In many cases the issues are paid lip-service. I advocate a much more systematic approach that aims to gain the benefits smart-city technologies offer, whilst minimising the potential risks.”

Minister of State with responsibility for data protection Dara Murphy said everyone would like cities to be “as smart as possible and to use new technologies for the greater good”.

“However, as a society, and as individuals, we also have to think about the privacy and security questions they raise. This report details the privacy and data security implications of smart cities, but importantly also suggests a number of measures to tackle them.”

1 Tax and spend: What have FG done for your pocket?
2 Fair Deal nursing homecare leaves little for bills and gifts
3 Pensions row fix could threaten future of State payment, actuaries warn
4 SAP hit by fall in cloud computing orders
5 Will the next decade be a better one for value investors?
Real news has value SUBSCRIBE