Tech Tools Review: ‘Star Wars’ fans can get their own version of the BB-8 droid

With a Star Wars reboot on the horizon a scatter of cash in toys were sure to follow. The first out of the traps is the 'BB-8 droid'. Ciara O'Brien reviews. 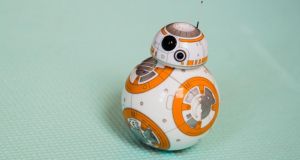 If you were a Star Wars fan in your younger days – or your not so younger days – the next best thing to catching a ride in the Millennium Falcon would have been having your own R2D2-style droid. You can get the voice-activated robot now, but back then it was only a pipe dream.

The new generation of Star Wars fans won’t have to wait. The BB-8 robot featured in the trailer for Star Wars: Episode VII – The Force Awakens, to give it its full title, is not only a real robot, it’s also a real robot toy.

Meet Sphero’s version of BB-8. The tiny droid is only 4.5 inches high, is controlled by your mobile phone and will respond to your commands. Yes, your actual voice. There are a few extras in there too, such as the ability to send and receive holographic messages.

All in all, it’s the Star Wars fan’s ideal toy.

It’s obviously much smaller than the film version, about the size of a tennis ball, with its head stuck on top. The head is held on by magnetic means, which allows it to rotate and stay in place as BB-8’s body moves.

However, that was the first hiccup: his head was knocked off a few times before I even got properly started.

Learning how to control BB-8 will also take a few minutes. There were more than a couple of crashes when it raced off in the opposite direction I intended. However, this wouldn’t have happened if I had paid more attention during set-up. The BB-8 has a flashing blue light that works as its direction indicator. If you can see it, that’s the direction it will take off in. Once you have that nailed down, it’s simple.

You don’t have to give BB-8 instructions all the time. You can set it to patrol by itself or turn on voice commands and start a conversation with it. That could be anything from telling BB-8 to run away to asking it how it feels (I have yet to decode what it means).

The idea is that BB-8 becomes more autonomous the more you use it. That will take longer than the time I’ve had it, but in the meantime it should be fun testing it out.

The other thing it does is holographic messages. This is possibly slightly deceiving, because you need your phone to actually view the messages. You record your message and then line up your phone with BB-8; you get your very own Princess Leia moment on the screen

When it’s finally done – about an hour on a full charge – you pop it into its induction charging dock and let it recharge.

The fun factor. Let’s be honest: there is no reason to buy the BB-8 other than the fact that it’s great craic to power around the house and bump into things.

Also, shouting “It’s a trap” at random times and watching it speed off in the opposite direction is hilarious.

It really is tiny. If you want to pretend you’re in Star Wars, you’ll also have to pretend it’s a full-sized BB-8. Also, the holographic messages aren’t really holographic; they are augmented reality and you need your phone to view them.

The one weak spot of the BB-8 is its head; as already mentioned, it was knocked off on a couple of occasions. Be prepared for this to go missing.

It’s no surprise that the BB-8 is already sold out and even on Sphero’s own website, you can’t get them until October.

However, Irish fans wanting to pick up the toy should stake out their local Disney store as, according to Sphero’s website, that’s where the BB-8 will be sold.

The BB-8 is probably going to be the most sought-after toy for kids this Christmas – and for big kids too.

1 Coronavirus: Construction sector most significant part of new shutdown
2 British exceptionalism backfires in style as Johnson tests positive for coronavirus
3 Remote working doesn’t suit everyone, and it exposes woolly leadership
4 UK needs to be honest about its Covid-19 strategy
5 Wetherspoon’s panto-villain chairman may have the last laugh
Real news has value SUBSCRIBE