Can a smart scale help you improve your baking skills? 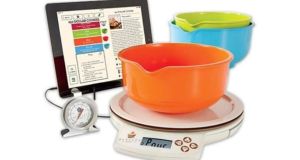 Perfect Bake promises to help you get to grips with cakes, cookies and other treats simply by hooking up your phone or tablet to the scale and following the instructions

A bit of honesty up front: I am not a baker. I’ve never been the type who can walk into a kitchen, throw open the cupboards and whip up a cake from the meagre ingredients that lurk at the back. My rock buns were more like actual rocks than cakes. I’ve burnt cookies and undercooked fairy cakes. At some point I decided enough was enough: Rice Krispie buns were about as sophisticated as it got for me.

So a smart scale that promises to help you get to grips with cakes, cookies and other treats simply by hooking up your phone or tablet to the scale and following very explicit instructions, well that’s more than tempting.

Perfect Bake, it seems, is my ticket to becoming a wizard in the kitchen. The package includes three coloured bowls, a scale, a stand for your phone or tablet, and an oven thermometer. The scale connects to your iOS or Android device through a small cable that connects to the headphone jack. The app has a plethora of recipes that you can sort through according to category and you get a list of what you need to have on hand, both in terms of ingredients and kitchen equipment.

I decided to start with something simple. Chocolate chunk cookies: a classic but relatively simple, right? Mix some flour in a bowl, throw in some chocolate chips and an egg or two, lash in the sugar, mix it all together, and you have something that wouldn’t be out of place on Cake Boss. Right?

It started off well. The app gives you a massive helping hand in that it tells you what you need to do before you even get your hands on a single ingredient. Pre-heat the oven now, it suggests, and prepare your cookie tray. You can scale back the ingredients if you want to make less than the default setting on the app.

The flour went in first, using the prescribed bowl of the set. As the flour poured in, the app showed the corresponding box filling until a satisfying ping told me I’d put in the right amount. Then it was on to the salt, which the app warned me was a small amount so measure carefully. That was when I hit a slight snag. The scales wasn’t registering the salt as I poured it, although it did jump to full after several seconds had elapsed.

Then it was on to the wet ingredients – egg, butter and mixed with sugar. It’s at that point that I hit the second snag – I don’t have an electric mixer. Which is handy when you want to make cookies. The app actually tells you this, but I didn’t scroll down far enough to see it. But no matter. Electric mixers might be convenient, but people baked before they had them, right? By hand? Of course. So I set to it with a whisk, and started the countdown timer. A minute and a half with an electric mixer is not the same as a minute and a half mixing by hand though, so I added extra time.

When it’s time to move the cookies to the oven, the app helps there too, telling you how long to keep them there for. The finished product actually didn’t turn out half bad. Edible, or so my guinea pigs claim, and no one has yet come down with some sort of rare allergy to terrible baking.

The step by step process means that it’s very difficult to get it wrong. Perfect Bake is very good at hand-holding, and the “ping” the app makes as you complete each step is a validation that you’re on the right path.

Measuring small amounts can be problematic. And if you are an inexperienced baker, any uncertainty is not welcome. The scale uses a wired connection, which means your phone or tablet has to be pretty close. That made for a grubby screen.

Although the app doesn’t allow for much veering off recipe, you can force the scale to skip ahead to the next step if you really want to. That’s handy if you decide to substitute chocolate chips with something healthier. The oven thermometer is still unused.

Perfect Bake may not be 100 per cent perfect, but who is? It’s persuaded me to take a chance on a few more ambitious creations too, which could still go awry, but isn’t that half the fun?