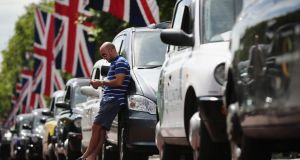 A taxi driver looks at his phone during a protest against smartphone app Uber yesterday in London. The city’s licensed taxi drivers are campaigning against the introduction of the app in the UK. photograph: dan kitwood/getty images

Taxi drivers sowed traffic chaos in Europe’s top cities yesterday by mounting one of the biggest yet protests against the Uber app, a US car service that allows people to summon taxis at the touch of a button.

Drivers of hundreds of London’s black taxis snarled traffic in the streets around Trafalgar Square, hooting their horns as they passed Downing Street and the Houses of Parliament.

In Paris, taxi drivers slowed traffic on major arteries into the city centre during the morning commute.

In Berlin hundreds choked the main road to the city’s historic centre, while commuters juggled buses and trains, or simply walked, to get to work in Madrid and Barcelona.

San Francisco-based Uber Technologies, valued last week at $18.2 billion (€13.45 billion) just four years since its 2010 launch, has touched a raw nerve by bringing home the threat of technological advances to one of the world’s most visible trades.

“This is about an all-out assault on our profession, our livelihoods,” said Max Small, a driver of one of London’s black taxis for 34 years.

“These big companies are coming in, not playing by the rules.”

Taxi drivers across Europe level a variety of charges against Uber: that its applications break local taxi rules; that its drivers fail to comply with local insurance rules; and that it is therefore in breach of licensing and safety regulations.

Uber, backed by investors such as Goldman Sachs and Google, refutes all those allegations, a spokeswoman said.

Uber said the company, its applications and its drivers complied with local regulations.

“What you are seeing is an industry that has not faced competition for decades. Now finally we are seeing competition from companies such as Uber, which is bringing choice to customers,” said Pierre-Dimitri Gore-Coty, Uber regional general manager for Europe.– (Reuters)

1 How long can Government afford to keep State pension age at 66?
2 How much will a Covid-19 vaccine cost?
3 Guinness brings out a non-alcoholic version of the black stuff
4 Frank Fitzgibbon stepping down as Sunday Times editor
5 Google's incredible power is the result of decades of regulatory failure
Real news has value SUBSCRIBE