SXSW wowed with promises of breakup for tech giants 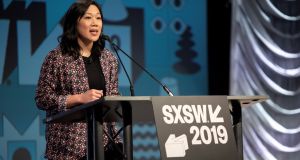 Priscilla Chan gives a speech about the Chan Zuckerberg Initiative at the South by Southwest (SXSW) conference and festivals in Austin, Texas. Photograph: Sergio Flores/Reuters

Democratic presidential hopeful Elizabeth Warren said breaking up giant tech companies would “keep the marketplace competitive” during an appearance at one of the biggest technology events in the U.S.

The Massachusetts senator spoke at the annual South by Southwest (SXSW) cultural festival in Austin, Texas, a day after proposing to take steps to break up companies like Facebook and Alphabet’s Google if she’s elected.

On Friday she called for legislation that would designate large technology companies as “platform utilities,” and for the appointment of regulators who’d unwind technology mergers that undermine competition and harm innovation and small businesses.

“The idea behind this is for the people in this room”, for tech entrepreneurs who want to try out “that new idea”, Warren told a packed and enthusiastic crowd. “We want to keep that marketplace competitive and not let a giant who has an incredible competitive advantage snuff that out.”

Senator Warren said venture capital “in this area” has dropped by about 20 per cent because of a perceived uneven playing field. She didn’t provide more detail or say where she obtained her figures.

Senator Amy Klobuchar, who announced her 2020 bid last month, also spoke in Austin earlier on Saturday. The Minnesota lawmaker is the top Democrat on the Senate’s antitrust panel. She stopped short of endorsing a breakup of large technology companies.

Asked if the likes of Google, Facebook or Amazon. com should be split, Senator Klobuchar said she would first want an investigation. While vowing to make antitrust “cool again”, she suggested a more measured approach.

“We are going to be able to have a better discussion of this framed in a way around things like pharma pricing and data privacy, which is going to make it more bite sized and doable for an election,” she said.

Earlier, during an interview with CNN, Priscilla Chan, the wife of the Facebook founder Mark Zuckerberg and co-founder of the Chan Zuckerberg Initiative, who also addressed the SXSW event, said: “For people who can afford it, paying higher taxes is not a bad thing. We should be doing that.”

SXSW is the biggest gathering so far for the Democrats – and a few Republicans – running in 2020 or otherwise part of the political scene.

The conference has evolved into one of the country’s defining cultural events, combining music and film festivals with showcases for technology and politics. This year, it’s an ideal venue for presidential aspirants to test their message with one of their core audiences: millennials and post-millennials. – Bloomberg