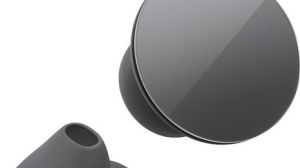 The large flat panel on each earbud gives the impression that you are wearing some sort of bizarre earrings, but that panel has a function.

Where to buy: microsoft.com

Microsoft Surface Earbuds
€213
It was only a matter of time before Microsoft brought out a rival for Apple’s AirPods. The company has already taken a step into the audio world with its Surface headphones, which were generally well received. Now there are the Surface Earbuds: in-ear, open fit, and easier to carry around with you.

Microsoft is pitching the Surface Earbuds as an essential tool for workers too, integrating with Office 365 for dictating emails and documents, giving you control over PowerPoint presentations, and enabling on-screen captioning and translation.

Those features depend on a few things though, the most obvious being an Office 365 subscription, or a Windows 10 system. This being Microsoft, it makes sense that the earbuds will work best with the company’s own operating system, pairing in a matter of seconds. But that doesn’t mean the experience with other operating systems is sub-standard. The Surface Earbuds paired quickly enough with both iPhone and Android, with the latter using Fast Pair, and the touch controls for music and the digital assistant translated well.

The key thing here is the Surface Audio app, which walks you through the process step by step.

But before we dig into that, let’s have a closer look at the design. Microsoft, like Apple and Samsung before it, has gone for its own distinctive take on the earbud design, with a large flat panel on each earbud. It gives the impression that you are wearing some sort of bizarre earrings, but that panel has a function – those aforementioned touch controls. Other earbuds have managed to get touch controls into their earbuds without having to resort to such design choices, but the Surface Earbuds load a lot on to those touch controls.

That means it can be a little difficult to remember what you are supposed to do, and you end up tapping and swiping uselessly at times.

It also means getting them out of the box is difficult, because there is nothing to grip on to. You end up turning the box over just to get them into your hand.

All that aside, how do they sound? Good, actually. The audio quality will, of course, depend on the quality of your source material but, overall, the Surface Earbuds impress. Everything from music to presentations sound clear and rich.

That quality extends to the voice calls. Microsoft has built two microphones into each earbud, so you should sound clear. Background noise can be an issue at times though, so choose your locations with this in mind.

There is no noise cancelling either, and the open fit means you don’t get a noise-isolating seal. However, that can be a good thing when you want to keep an ear on what is going on around you.

Battery life is impressive – seven hours of listening with a full charge, and up to 24 hours when the case is taken into account. There is no wireless charging for the case, however, which is a bit of an inconvenience.

If you are on Windows and using Office 365, there are a lot of extra features to make these earbuds worth your while. The PowerPoint control is certainly a bonus, as is the on-screen captioning, but it’s a niche feature for most people.

Sound quality on the earbuds is great, regardless of whether you are listening to music or taking part in a Teams meeting. The two microphones work well at picking up your voice too, so you sound clear to others on voice or video calls.

The open-fit earbuds may be comfortable for most people, but I found it difficult to get a good fit. Even swapping over for the smallest silicon tip, it always felt like they were protruding too far out of my ears and about to shake loose. That seems to be something that was limited to me, however, but it is worth bearing in mind if you have ears that are smaller than average.

The earbuds pair with a single click to your Windows devices, and with one tap on Android. You’ll need to download the Surface Audio app, which will bring you through the set-up process quickly.

Good option for home working, but won’t suit everyone.