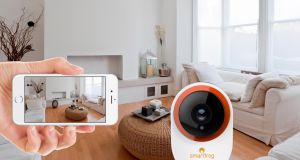 The Smartfrog hardware camera competes with the likes of Alphabet’s Nest Cam.

Dublin-based technology firm Smartfrog has closed a new round of funding, raising $5 million.

The internet of things start-up plans to use the money to expand interntionally as it continues to develop the home and small business surveillance product it launched late last year. Since October last, the solution, which includes a video camera, app and storage, has signed up users in more than 65 countries.

The latest round of funding was led by Target Global, a new investor in the firm, and its previous backer e.ventures. It brings to $10 million the total funding the company has raised.

In addition to its hardware camera, which competes with the likes of Alphabet’s Nest Cam, Smartfrog also offers a free app that turns almost any smartphone and webcam into a surveillance camera.

The company has its headquarters in Dublin, with offices in Germany, China and Switzerland. It currently employs around 50 people, with the Dublin office looking after customer care, tech support and financial support. Its chief financial officer John Fitzgerald, formerly of CleverCards.com, is based in Ireland.

It intends to keep expanding,with plans for offices in the UK and US.

1 How long can Government afford to keep State pension age at 66?
2 How much will a Covid-19 vaccine cost?
3 Guinness brings out a non-alcoholic version of the black stuff
4 Frank Fitzgibbon stepping down as Sunday Times editor
5 How on earth do we the calculate the cost of Level 5 for the Irish economy?
Real news has value SUBSCRIBE