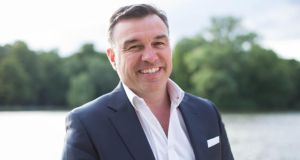 Morgan Browne: said about 30 of the jobs would be in Ireland, with the remaining 20 based abroad

Dublin-based software provider IIS Group is to create 50 new jobs, taking the number of positions created within the company to 80 this year. The jobs will be spread across the company’s headquarters in Ireland and offices in Britain, the Netherlands and Poland.

IIS Group chief executive Morgan Browne said about 30 of the jobs would be in Ireland, with the remaining 20 based abroad. “We are looking for a huge variety of people from sales and marketing to IT support,” he said. “Everyone thinks IT is for young people but in reality we need people with business experience, preferably 20 or 30 years of business experience,” he added.

Mr Browne, a finalist in this year’s EY Entrepreneur of the Year competition, said the new positions came as the company experienced sustained growth.

“At the end of last year, the IIS Group announced plans to create 30 new positions to supplement our European and global activities. All these positions are now filled and based on our 40 per cent growth so far this year, IIS now requires a further 50 people to satisfy demand,” he said.

He added that the growth had been driven by the economic upturn both in Ireland and on the continent, adding that two-thirds of the company’s revenues now came from the UK and Europe. He anticipated doubling the business in size in the next two to three years.

The company, which provides business management software, services and support to small- and medium-sized enterprises, had a turnover of €1.5 million in 2011. This year it was on track to do €10.5 million in revenues, Mr Browne said.

Employee numbers have grown from 14 in 2010 to more than 100 this year. When the new positions are filled, the group’s total headcount will exceed 150 people.