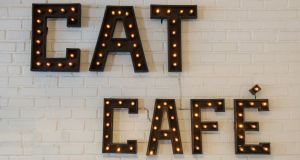 If it gets funding, visitors to Dublin’s cat cafe will pay €10 to drink coffee and play with the resident cats.

Crowdfunding has helped raise millions of dollars for thousands of projects all around the world, thanks to the support of individuals pledging money. But, for every big name project that brings in the millions, there are those smaller quirky projects that are hoping to attract a niche audience - remember the near 7,000 people that backed a project to make potato salad?

In Ireland, those looking to launch a project have a range of options including US giant Kickstarter, the international crowdfunding website Indiegogo, as well as the local Fundit.ie and icrowdfund.ie.

Below we take a look at five of the more unusual Irish crowdfunding projects currently pitching for backers:

Are you a fisherman who caught a memorable fish? If so, and if you ever wanted one of your memorable catches to be made into a real drawing before you gut it and cook it, here’s your opportunity. FishPics turns a photo of a fish into a real drawing, and to date has raised €195. Backers can support the project by pledging €8 for a miniature drawing, or €15 for an A4 size drawing.

The goal of this Kickstarter project is to raise €250 to allow people send a St. Patrick’s Day leprechaun or fairy. By pledging €4 to the project, backers will have five designs to choose from, including Molly, who has dyed her beer green and is wearing a leprechaun hat, and Patrick “ jumping with joy as he reaches the end of the rainbow to find the pot of gold”. So far €4 has been raised.

The US may have Hooters, the chain of restaurants staffed by scantily clad females, but Michelle Ryan wants to bring a male version to Dublin city. She hopes to raise €94,647 via Kickstarter to “create a fabulous restaurant in Dublin, Ireland that celebrates the beauty of the male body form”. Oh, and it will also have “food you’ll rave about”. If that doesn’t whet your appetite maybe this will: waiters will be dressed in “ tight shorts and vest tops” and these tops may come off “occasionally” as food is being served.

Newly launched, the project has not yet received any backers.

Playing with cats in a cafe

Dubliner Georgina O’Neill is hoping to raise €35,000 to open the city’s first cat cafe. Originating in Taiwan in 1998 and popular in Japan, cat cafes are popping up - albeit in small numbers - all over the world, and allow cafe goers to enjoy the company of cats while they sit and chat.

In Melbourne Australia, for example, customers can visit the city’s Cat Cafe and eat and drink while playing with its 14 resident cats, while London’s Lady Dinah’s Cat Emporium is home to 12 cats, and visits start at £6.

Crazy Cats will charge customers €10 to enter, and the project has raised €272 to date.

The project has been in gestation since 2014, but O’Neill has just launched a new attempt at raising funds via Kickstarter.

Protecting animals with a drone

A voluntary association – the National Animal Rights Association – is hoping to raise enough funds to buy and operate Ireland’s first animal protection drone: a Phantom II quadcopter. The drone will help seek out examles of animal abuse such as fur farming, hare coursing and illegal stag hunting. So far it has raised £1,231 from 62 backers out of a £1,781 goal on indiegogo.com

1 Dublin banker sells island off coast of west Cork for €5.5m
2 Nigeria seeks more time to fight $9.6bn award to Irish businessmen
3 Will Revenue come calling with tax bill if inheritance tax threshold falls?
4 Lidl goes to court over Aldi price survey
5 If tourists are such pariahs should we not be testing them on arrival?
Real news has value SUBSCRIBE