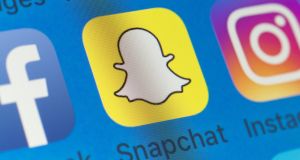 Shares in the owner of Snapchat tumbled more than 7 per cent to their lowest in nearly four months after rival social media group Facebook said it was launching a new camera-focused messaging app under its Instagram banner.

The move could deepen the rivalry between the pair, which has most recently seen a resurgent Snapchat fight back investor concerns it faced an exodus of users to Instagram, which had adopted a number of the in-app features of its peer.

Facebook has stepped up efforts to address privacy concerns in the wake of the Cambridge Analytica scandal. Last year the company introduced the Close Friends function, allowing users to share “personal moments” with a more selective list of people.

Snap shares dropped as much as 7.6 per cent, pulling them back to their lowest level since mid-June. Shares are down 22 per cent since hitting a 16-month high in July after the company reported better than expected revenue and record high users during its second quarter.

Facebook was up 2.4 per cent to a one-week high. – Copyright The Financial Times Limited 2019