Self-driving buses take to roads alongside commuter traffic in Helsinki

In Finland, the Easymile EZ-10 electric mini-buses, capable of carrying up to 12 people, will roam the open roads of Helsinki’s southernly Hernesaari district in a month-long trial, negotiating traffic for the first time. Video: EasyMile 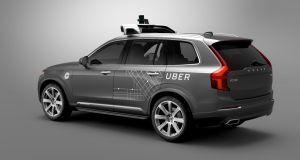 In Pittsburgh a deal between Volvo and Uber means specially modified Volvo XC90 SUVs wil be available for customer to summon, starting later this month. 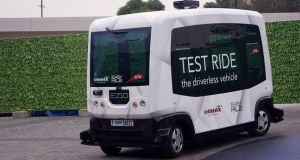 In Finland, the Easymile EZ-10 electric mini-buses, capable of carrying up to 12 people, will roam the open roads of Helsinki’s southernly Hernesaari district in a month-long trial, negotiating traffic for the first time.

Two self-driving buses have rolled out on to the public roads of Helsinki, Finland, alongside traffic and commuters, in one of the first trials of its kind. Meanwhile in Pittsburgh a deal between Volvo and Uber means specially modified Volvo XC90 SUVs will be available for customer to summon, starting later this month.

In Finland, the Easymile EZ-10 electric mini-buses, capable of carrying up to 12 people, will roam the open roads of Helsinki’s southernly Hernesaari district in a month-long trial, negotiating traffic for the first time.

“There’s no more than a handful of these kinds of street traffic trials taking place, if that,” according to Harri Santamala, test project lead and Metropolia University of Applied Sciences project manager.

The wider trial follows a successful pilot on closed roads in the neighbouring town of Vantaa during a housing fair.

The city traffic will provide challenging scenarios for the buses to overcome, as they have to keep pace with commuters and other road users, who may not be predictable. The buses have a maximum speed of 40km/h but will travel at an average speed of 10km/h, making them unusually slow-moving vehicles during non-gridlocked times.

The automated buses are being seen as possible an extension of Finland’s public transport system, moving commuters into higher-volume transport systems where costs of alternative transport have proved prohibitive, rather than replacing all human-driven buses.

Helsinki is two years into its 10-year plan to make car ownership pointless through point-to-point “mobility on demand” systems, but operating such a system has proven difficult. The smart municipal bus service, Kutsuplus, which integrated a system similar to Uber and other app-based ride hailing service, was shut down after a year due to costs and the low volume of passengers, according to the city.

It is hoped that small automated buses could fill that niche where human-operated transport has proved inefficient with municipal funds.

The Volvo deal is not exclusive with Uber, which plans to partner with other car firms as it races to recruit more engineers.

Volvo Car Group has agreed a $300 million alliance with Uber to develop self-driving cars. The investment will go towards researching and developing both hardware, such as sensors used to detect traffic and obstacles, as well as software for the self driving cars. “Autonomous driving is key. For this you need software to develop and be safe,” Volvo Chief Executive Hakan Samuelsson said.