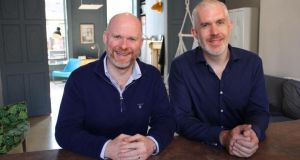 Irish fintech start-up Rubicoin has raised €1.2 million in funding from new and existing private investors as it rolls out its flagship Invest app worldwide.

The NovaUCD-graduate company, whose backers include Enterprise Ireland and American investment advice group the Motley Fool, was co-founded by Emmet Savage and John Tyrrell in 2013.

The firm, which has raised €3 million to date, is seeking to expand into new markets as its launches its flagship app worldwide.

Invest is an app that make it easy for people to start investing from their smartphone by giving straightforward instructions on how to buy shares and clear choices on what shares to buy. The app launched in the US in December.

Rubicoin, which last year doubled its workforce to 13 employees, also has a second app, called Learn, that helps users understand the stock market.

Abridged accounts filed with the Companies Registration Office earlier this year show accumulated losses for the company rose from €7,443 to €485,250 in 2015.

“Our latest funding round will assist our successful expansion into new markets, which is a very exciting prospect for us,” said chief operating officer John Tyrrell.