Tech Tools: The SRS XB2 speaker may be small in size, but it’s mighty on sound 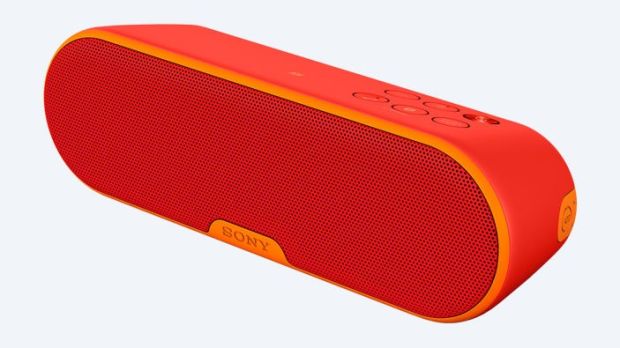 The Sony SRS XB2 speaker has been knocking around for a while, but as we hit festival and holiday season, it’s a good time to look at your options for portable audio. Sony’s speaker may be mini, but its audio certainly isn’t.

The Bluetooth device is intended to be portable, but not so portable that you shove it in your pocket and forget about it. At 480g and 191mm in length, the XB2 is more of a bag speaker.

Looks-wise, the XB2 isn’t bad. Front and back are metal speaker grilles, with a plastic case. On the top, you have controls for power, volume, bluetooth and pairing, calls and extra bass. On the side, there’s an add button that allows you to pair a second speaker, and the rear is a covered 3.5mm jack, USB charging port and reset button.

The speaker comes in a range of colours, from traditional black – classic but uninspiring – to more vibrant red, green and blue options. It all depends on your personal style.

The speaker is designed to be easy to set up, boasting about its one-touch pairing and NFC. It’s a claim it lives up to – pairing was simply a matter of holding the bluetooth button and connecting your phone or tablet.

That’s all you need to do to get the speaker working – besides charging it, of course – and you are ready to go.

You can’t quite go hands-off with your phone, however. Although the speaker will look after volume – which can be overridden with your phone’s volume controls too, by the way – you don’t have any way to control playback. To skip tracks, play and pause music, you’ll still need your phone.

It’s a minor point, though. Although the speaker has decent audio for its size, it really comes into its own when you hit the bass button. The sound noticeably changes and the bass is more pronounced without being overwhelming. It won’t trouble more expensive speakers, but it will keep most people happy.

You can link two of the speakers together to create bigger sound, although how many will actually use it is another thing.

The speaker boasts a battery life of up to 12 hours. In tests, we never quite reached that, but got close enough. Your listening style will obviously influence that time limit; wireless will suck more power than wired, and the higher you push the volume, the less time you’ll get out of it.

The speaker is water resistant – note “resistant”, not “proof”, so it will take a splash or two but don’t immerse it in water. A shower of rain should be okay; a dip in the sea, less so.

The SB2, as mentioned, also works as a speaker for your calls, so if someone interrupts your music you can take the call without having to touch your phone.

It’s portable, it has a decent battery life and the sound is great. There’s a lot to love about the SB2. The ability to hook up a second speaker is an interesting feature that some people – with deeper pockets – will love. At €119, the SB2 is budget friendly-ish, and performs better than you’d expect in the sound stakes.

While it’s relatively easy on the pocket, the SB2 isn’t cheap enough that most users will jump at the chance to pay out for a second one. That “add” feature will likely be reserved for those who have friends with the same speaker.

The speaker is water resistant not waterproof – an important distinction that is the difference between drying off your still-working speaker and having to invest in a new one. You can also use the speaker with devices that don’t have Bluetooth built in, through the 3.5mm jack. You’ll have to supply your own cable though.

For the price, the Sony SRS XB2 delivers impressive sound.

4:43 Shane Lowry battles back from triple-bogey for steady opening 72 at US Open

The Irish Times Business Person of the Month: Gwen Layden 04:55
Revised application for 30-storey tower in Dublin city centre 00:27
Assessing the impact of what happens at work on people’s commute 00:00
Kerry Group seals €819m deal to sell consumer foods unit to US firm 22:50
National debt agency hunts for new boss as Conor O’Kelly due to step down 21:09