Review: Is the iPhone 7 worth the upgrade? 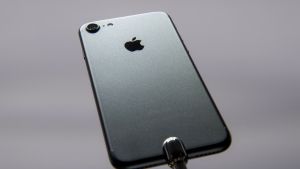 It would be easy to overlook the iPhone 7 in the rush to evaluate the new iPhone. It doesn’t have the large screen of its 7 Plus stablemates, nor does it have the dual camera system that has captured the imagination of consumers.

But there is plenty to like about the iPhone 7.

Lookswise, it treads a similar path as the 7 Plus. It sticks with its 4.7 inch screen, and although the antenna bands have been changed a bit, the case looks almost identical to the 6S. It doesn’t have the dual camera to mark it out as anything different, so it will fly largely under the radar.

A word of warning. If you are planning on going for the jet black finish, buy a case. Apple warns that you may pick up “microabrasions” on the finish, which is probably going to annoy you after a while. Toss it in your pocket with your keys too many times and you’ll wind up with more than a few permanent marks on that back case. At the very least, the shiny black case is prone to smudges and fingerprints, although not as much as you might expect. If that is going to grate, go for the regular black option, which comes with a matte finish.

It also has the touch sensitive home button with the haptic feedback. I find it hard to hate it, because I barely noticed the difference. The taptic engine that has taken the space the headphone jack used to occupy solves that problem. Press the button and you’ll get a jolt of feedback rather than the click the 6S gives. It’s hard to pick it out though, and after some initial weirdness, I completely forgot it wasn’t a regular mechanical button.

Because let’s face it, water resistance is something that is worth sacrificing the click home button for. There have been too many tales of dunked iPhones that have slowly – or rapidly – met their doom, including dips in the toilet, a sink and in one recent tale that was related to me, a washing machine.

Like the 7 Plus, the iPhone 7 is powered by an A10 Fusion chip, with the power bump and efficiency that brings. It can be powerful when it needs to be, and dial things back when it doesn’t. Good news if you want to play games on your phone, or run some more intensive applications, but still like to have a battery that lasts more than a couple of hours. There have been rumours that benchmarking tests have shown it has less RAM than the 7 Plus, but on the performance front, there were no issues that we uncovered with the iPhone 7 on a day-to-day basis.

And speaking of day to day, the battery life on the iPhone 7 is, as promised, an improvement on the 6S. The latter barely lasts a full day with heavy use, but the iPhone 7 still had some to spare by the time the sun went down. That gets two thumbs up alone.

The camera may not live up to the 7 Plus’s dual offering, with its telephoto lens and forthcoming bokeh effect, but it’s still a great camera. It gets the four LED True Tone flash that the 7 Plus offers, and it also performs better in low light than its predecessor. Details are clearer, and there’s less of a gloomy cast on images when the lighting isn’t perfect.

The iPhone 7 has stereo speakers and that missing headphone jack. Get used to your new Bluetooth buddies, or be prepared to use those stereo speakers a lot. The iPhone 7’s speakers, by the way, are probably going to be the very thing that people will be complaining about in a few months time. The current hell that is the commute home, thanks to people playing music through their tinny phone speakers, is about to get a whole lot worse. Even if it does sound a lot better.

The camera may not be quite at the level of the 7 Plus, but many people can live without the extra camera lens if they get better low light images. No more murky, soft pictures – well, fewer of them anyway. It’s also easier to handle than the Plus, with that 4.7 inch screen more likely to fit in your pocket.

The price of the iPhone 7 is hardly on the budget end of things, and when you weigh up the better camera technology in the iPhone 7 Plus, you may opt for that instead. Depending on how important cameras are to you, of course.

Like the 7 Plus, there is no headphone jack, so you may need to rethink your audio options if you need to charge your phone while you listen to music.

We won’t pretend that the iPhone 7 is a massive leap forward in technology that will silence the critics and propel it ahead of Samsung permanently. Perhaps that will come next year with the 10th anniversary of the iPhone. But if you are an iPhone user, and you can get over the lack of a headphone jack, it’s certainly an upgrade worth considering.