British plans for an an ‘invisible’ or ‘frictionless’ digital border dismissed 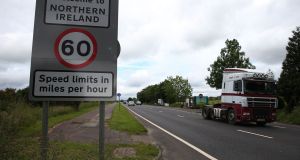 “It’s one of these things that if people say it often enough it starts to sound like something that could work,” said Sadhbh McCarthy, who set up and led the Centre for Irish and European Security 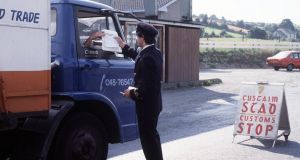 “It doesn’t matter what you do electronically to minimise the visuals, a border will still exist. You can reduce the number of people who are seen doing things but you will always need to have them nearby to respond when a problem is identified,” says Sadbh McCarthy 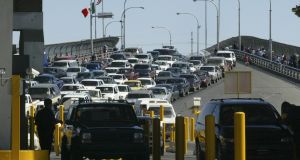 Calls for an ‘invisible’ or ‘frictionless’ digital Border between the Republic and Northern Ireland that could be policed through technology are “complete nonsense,” a number of leading security research specialists have said.

“It’s one of these things that if people say it often enough it starts to sound like something that could work,” said Sadhbh McCarthy, who set up and led the Centre for Irish and European Security (CIES).

“If border issues were that easy to sort out do you think the US, with all its resources, would be considering building a big wall with Mexico?” added Ms McCarthy, who has also served as managing director at the at the European Biometrics Forum, and in a number of IT roles with the likes of IBM and Diageo.

The British government unveiled a new position paper on Wednesday that outlines plans for a “seamless and frictionless” border with the European Union, which would largely policed through the use of technology. However, Ms McCarthy said politicians are misguided into thinking that technology could resolve post-Brexit border arrangements.

“You can put in as many complex technology solutions as you like but you will never get over the need for personnel on the ground,” Ms McCarthy said.

“It doesn’t matter what you do electronically to minimise the visuals, a border will still exist. You can reduce the number of people who are seen doing things but you will always need to have them nearby to respond when a problem is identified,” she added.

The UK government’s position paper outlines plans to minimise customs checks after Brexit. It also calls for the retention of the common travel area, a pact that allows free movement between the UK and Ireland for British and Irish citizens.

While light on specifics, it is believed that Britain will offer to track goods crossing the Irish border with CCTV cameras and automated number plate recognition (ANPR) technology as part of a so-called ‘light touch’ digital border.

It follows on from the airing of a number of proposed solutions aimed at avoiding a return to a so-called hard border with checkpoints, watchtowers and so on.

The land boundary is almost 500km long with up to 200 crossing points with an estimated 177,000 lorries, 208,000 vans and 1.85 million cars passing across the border every month. Additionally, around 30,000 people cross the border daily.

Speaking to The Irish Times, Ms McCarthy said while there was a range of technology available to assist the tracking of individuals and vehicles across borders - including heat detection devices, RFID tags, drones and ANPR, they could not completely resolve the issue.

Ms McCarthy said while the idea of digital borders has been popular for a number of years, they were in reality very difficult to introduce.

“Neither I or my colleagues are aware of any instance in which a solution such as that envisaged by politicians for Brexit has been established anywhere in the world,” she said.

“Whatever solution is proposed is going to be expensive and problematic as there is no easy re solution. The idea that you can use technology in some way to minimise what is essentially a political problem is ludicrous. There are plenty of snake oil salespeople out there who might tell you otherwise, but the fact remains,” Ms McCarthy added.

Dr Mark Maguire, head of Maynooth University’s department of anthropology, and someone who has over a decade’s experience focusing on security and border issues, also questioned the likelihood of a frictionless border working in practice.

“There’s no magic bullet. It just doesn’t exist,” said Dr Maguire, who has just returned from a Nato-sponsored research trip to the El Paso/Juarez crossing point, one of the most heavily guarded borders in the world.

“The technology is certainly there to produce a smart border and in fact there are many of them in existence already, such as between the US and Canada and Israel and Palestine. But the reality is that this involves a crossing between Newry into Europe and you simply can’t allow for the border of Europe to be porous,” he added.

Dr Maguire said smart borders can only come after agreements have been made and added they are not in themselves a solution.

“It is possible they are trying to talk up the technology in order to make a tech solution more palatable down the line because if it just crept in then there would be opposition because it is primarily used for surveillance. People living and working near the border would likely not enjoy having drones etc flying above their heads every day,” he said.

That study said emerging technologies such as analytics, artificial intelligence (AI), blockchain, the internet of things (IoT) and biometrics must play a greater role in border management.

Regardless of Brexit, the report suggests that with that increased need for new technologies to monitor Border crossing points.

1 Irish company to test vaccines on volunteers deliberately infected with Covid-19
2 Should I switch bank now with Ulster Bank at risk of closing?
3 Air travel never going ‘back to way it was’
4 Bank of Ireland sees more than 1,400 staff apply for redundancy
5 Eir takes on extra staff as ComReg chases it on complaints
Real news has value SUBSCRIBE