Playing the stock market can be easy and entertaining 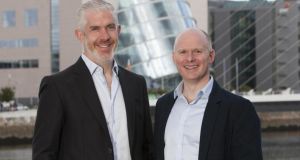 Interested in shares and investing but haven’t a clue where to start? Or perhaps you picked up a bit here and there, but lack the confidence to start to buy or sell?If either of those descriptions apply to you, you’re just the person for whom former Vodafone managers Emmet Savage and John Tyrrell designed their new app, Rubicoin.

The NovaUCD-based venture – which is backed by the pioneering giant of online investment information, the Motley Fool – aims to make learning about the markets easy and entertaining.

And once a fledgling investor has confidence, Rubicoin will handhold a person through the process of assessing some pre-chosen shares, and buying, if desired, through any of five major online brokers.

Savage, who has been fascinated by stocks and shares since childhood, says the key point is to make the markets as interesting, jargon-free and accessible as possible.

The way they describe themselves on the Rubicoin website establishes that Rubicoin isn’t exactly the Financial Times or the Wall Street Journal in tone.

“Rubicoin was set up by two old friends, one has been buying shares on the US stock exchanges since he was a teen, the other building technology stuff since he had hair,” it reads.

That irreverence echoes that of Rubicoin’s financial backer, the Motley Fool. Savage was already well known to the Motley Fool, having been asked by one of its co-founder brothers, Tom Gardner, to contribute articles to the site after Gardner read his regular posts in the Motley Fool’s forums.

“That was like a surfer being asked to surf for a job,” says Savage, who had joined Eircell – which eventually became Vodafone – after university. His side interest – and success – in the markets soon became known to co-workers and he was asked to give an introductory class in investing to Vodafone employees.

That once-off class turned into several more, but trying to talk to classes that had expanded to a couple of hundred people (with class fees donated to charity) led him to think about ways of making the experience more of a one-on-one discussion, than a one-to-many lecture.

Savage had all his investments audited and then had his results benchmarked against those of the world’s most high-profile investment pro: Warren Buffett. According to Savage, he has outperformed Buffett, earning an average return of 24 per cent over his investment career; Buffett’s is around 20 per cent, though his career has admittedly been longer.

“A really pivotal moment was when the Motley Fool said they’d get behind this venture,” says Savage. He also raised some angel investment to develop the app, which came to a total of €785,000 last January. Rubicoin now 11 employees, and the app currently is in free beta format, with a formal launch planned for early next year.

“So many people say, ‘I know I need to be in the stock market, but I don’t know where to go’,” says Tyrrell, who was head of networks for Vodafone before leaving to found Rubicoin. “The only products out there at the moment assume a certain level of understanding of how the markets work.”

“These came back as the failing points for the average person. We have a no-jargon guarantee,” Savage says. The financial world “is a huge palace built of jargon. The Wall Street Journal and the Financial Times really write for the 1 per cent.”

The Rubicoin app features content about basic to more advanced investment terms and topics, written in an easy-to-understand style. The founders say they had in mind a bulletpoint approach, where key information could be offered in a concise and clear way. That information can then be expanded into longer, more detailed explanations.

App users can work their way through the content and can see, via a dashboard, how far along they are in reading through all the material on offer.

Then the app offers information and evaluations on a range of hand-chosen shares, “a walled garden of hundreds of stocks”, says Savage. These are scored by a combination of both hard data and gut sentiment and are all companies he considers to be good investment choices, with “no car crashes”.

But what about the old financial warning that shares can fall as well as rise?

That’s part of the philosophy of investing they hope to explain to new investors, says Savage. “And you only make a loss when you sell.” Part of the learning curve for new investors is to learn to make decisions for the long term, as a portfolio of shares tends to outperform other forms of investment, he says.

“If the strategy is right in the beginning, it’s right when you sell,” says Tyrrell.

More features and data will be added as the Rubicoin investment community develops, says Savage.

“We’re all about wanting to see what people will value the most.”